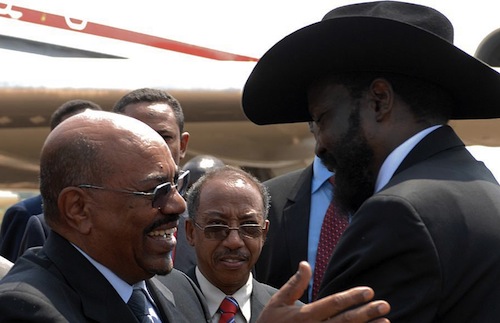 United Nations Secretary-General Ban Ki-moon and the Security Council welcomed the resumed negotiations between Sudan and South Sudan and urged them to resolve all remaining issues.

Sudan’s President, Omar al-Bashir, and his counterpart from South Sudan, Salva Kiir, are scheduled to meet Sunday in Ethiopia to finalize agreements on all issues being discussed under the talks, held under the auspices of the African Union High-Level Implementation Panel.

The talks have been designed to enable the two nations to fulfil their obligations under a so-called roadmap aimed at easing tensions, facilitating the resumption of negotiations on post-secession relations and normalizing the relations between the two countries.

“The Secretary-General congratulates the negotiating teams of the two parties for what they have achieved so far,” said a statement issued by his spokesperson.

“He urges both Presidents to now take responsibility for the resolution of their remaining differences, so that their summit concludes with a success that marks an end to the era of conflict and ushers in a new era of peace, cooperation and mutual development for the two countries and their people,” the spokesperson added.

The members of the Council “strongly encouraged the negotiators to continue intensive work to resolve all remaining issues,” Ambassador Peter Wittig of Germany, which holds the Council’s rotating presidency for this month, said in a statement read out to the press.

They affirmed that it is the responsibility of the two presidents “to exercise constructive leadership and demonstrate the political will” to ratify the progress made and bridge the remaining gaps to ensure the successful conclusion of the negotiations on 23 September.

The Council also reiterated its grave concern about the “rapidly worsening” humanitarian situation in Sudan’s South Kordofan and Blue Nile states. Hundreds of thousands of people have fled the two areas in recent months owing to conflict and food shortages.

“The members of the Council once again stressed the urgency of immediately delivering humanitarian relief supplies to the affected civilian populations, so as to avoid any further suffering or loss of life,” said the press statement.

South Sudan became independent from Sudan in July last year, six years after the signing of the peace agreement that ended decades of warfare between the north and the south. However, the peace between the two countries has been threatened in recent months by armed clashes along their common border and outstanding post-independence issues that have yet to be resolved.

The situation between the two countries will also be the subject of a high-level meeting to be convened on 27 September in New York on the margins of the General Assembly’s annual general debate.