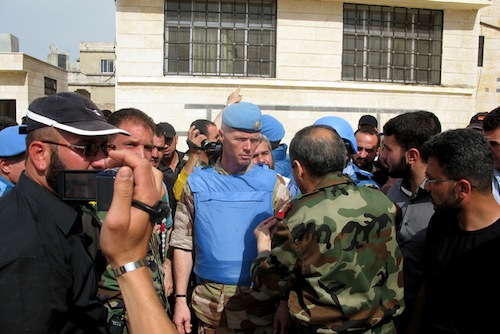 16 people were killed in clashes between Syrian regime forces and armed rebels on Sunday morning as a tenuous ceasefire, brokered by U.N.-Arab League peace envoy Kofi Annan, was supposed to take effect on April 12 now entered its second month.

In central Hama province, five people were killed by gunfire, including a woman, when regime forces raided the village of al-Tamanaa al-Ghab, the Syrian Observatory for Human Rights reported, while 18 people were wounded and several houses were set on fire.

In Homs province, a man and his son were shot dead by regular forces in the city of Quusair. More than ten people have been wounded there.

The U.N. mission in Syria has said it now has 176 military observers on the ground, more than half its planned strength of 300.

Since the cease-fire took effect  more than 900 people have been killed, raising the death toll of people killed since the outbreak of protests to more than 12,000 , according to the Syrian Observatory for Human Rights.

Syria has accused the United States and Western countries on Saturday of conspiring with al Qaeda-linked militants to target the country, in the wake of a recent string of explosions in Damascus and Aleppo the government has blamed on foreign-backed fighters acocrding to Information Minister Adnan Hasan Mahmoud,  Al Arabiya reported.

Meanwhile, opposition denies such accusations and has stated that the government is behind the blasts.

The United Nations says more than 9,000 people have been killed since the beginning of the uprising, while Syria says militants have killed at least 2,600 of its security forces.

Leave a Reply to Info