Syrian conflict preventing Palestinian refugees from going back to school 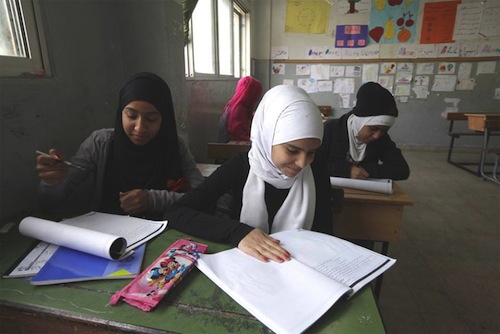 Over half of the schools run by the United Nations Relief and Works Agency (UNRWA) in Syria are closed, affecting some 45,000 children, it was announced yesterday.

“Whether because of damage to buildings or because of the overall insecurity, nearly two thirds of our students in Syria will not be able to return to their schools this fall,” UNRWA spokesperson Chris Gunness said in a press release.

He added that in addition to disrupting their education, the closures make it even harder for children to maintain a sense of continuity in an already difficult situation.

UNRWA said it is working on alternatives, such as broadcasting classes on its television channel and developing long-distance learning materials.

“The situation in Syria is a great challenge, but it has only increased the importance of ensuring that Palestine refugees have access to high-quality and continued education,” said Caroline Pontefract, UNRWA Director of Education.

Following a visit to the region in July, Leila Zerrougui, Special Representative of the Secretary-General for Children and Armed Conflict, said without a political solution to the conflict in Syria, the country faces “a generation of angry, illiterate adults.”

She said schools in the region are trying to assist Syrian children, but challenges remain stemming from discrepancies in curriculum, capacity and language.

In Lebanon, which hosts around 50,000 Palestine refugees, only about 35 per cent of students are enrolled in school, according to UNRWA figures.