Syrians in Greece join the Global March For Syria 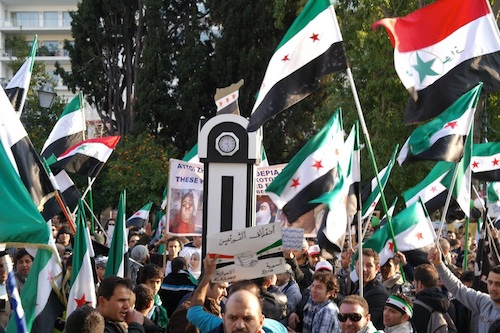 As the Syrian uprising enters its second year, hundreds of Syrians in Greece participated in the Global March for Syria, an initiative to take people form all over the world to the streets on March 15 in support of the Syrian people’s struggle. The campaign is explained in a video called “Against a Dictator” that has been widely shared online.

Men, women, children flocked Syntagma Square which brought to mind nothing but Homs’s clock square as hundreds of Syrian flags covered the sky and a make-shift clock tower, a replica of the clock tower in the centre of Homs was set up in the middle of Syntagma square, a rallying point for those in Syria’s Homs protesting for democracy.

Protesters stood to show their support and raise awareness on the situation in Syria. They had gathered to demand three things: an end to the slaughter and carnage of innocent people by Assad’s regime and called on the Greek government to recognize the National Syrian Council as the new representative body of all Syrians and to recall its ambassador form Syria.

They all gathered under the slogan, “We are Syrians and we want to overthrow the regime.” Together in loud voices they chanted “Free Free Syria”.

Eager to spread the message of freedom protesters performed a silent freeze flash mob leaving which could not go unnoticed by the passbyers. Later women with heated voices spoke against the killings and tortures of children in Syria while children sang songs and recited poems of the revolution.

Soon it got dark and Syntagma Square lit up with the hundred of candles to honor the people that have lost their lives in the Syrian uprising.

In other situations we could say “Happy first anniversary”, but surely this is not the case, says Syrian Jasmine. “We will continue to demonstrate until the Syrian people get their rights and freedom.”

In a move unthinkable a year ago, Syrians began taking to the streets in mid-March 2011 to call for political reforms, with the most significant demonstrations erupting on March 18. The protests spread as Assad’s security forces violently cracked down. More than 8,000 people have been killed ever since, while official data from surrounding countries and UNHCR’s own registration figures indicate that around 30,000 people have fled to neighbouring countries while significant numbers of Syrians are thought to be displaced inside Syria.