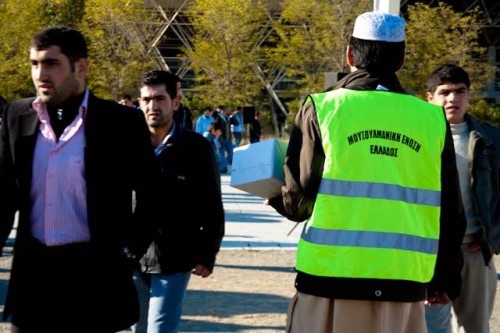 Threats against Muslim of Greece continue as Human Rights Watch called on the Greek government on Thursday to move quickly to adopt measures to combat hate crimes and protect victims.

A second letter, referring to a previous note sent via post on May 17 to the Muslim Association’s head offices in Neos Kosmos informs Muslims that this is not a provocation, that this is an actual threat and Muslims will see the results soon.

“The Muslim Association of Greece as always will take all the necessary legal steps and will cooperate with all relative authorities in order to deal with this blind direct threat against citizens of Greece by anonymous groups,” MAG said in a statement.

“The Muslim Association of Greece has no intention to get involved in any criminal conflict that has as its target to destroy the relations between Greek, Arabic & Islamic World for some filthy political interests,” it added.

On May 17, a letter sent to MAG threatened Muslims with bloodshed giving them month ultimatum to evacuate the country.

Naim El Ghandour, president of the Muslim Association told Alyunaniya.com at that time concerning the note that the letter is “99 percent a provocation but who can guarantee the remaining 1 percent?”

The hard copies of the letters obtained by Alyunaniya.com were typed in Greek, English and Arabic. Both letters were unsigned but carried the emblem of the extreme-right Golden Dawn party on it.

Alyunaniya can’t verify the authenticity of these letters.

A bill on hate speech and racist violence has yet to be submitted in parliament because of disagreement among the three parties in the ruling coalition over its scope.

According to media reports, the bill would outlaw incitement against people because of their race, religion, ethnicity or sexual orientation, and impose jail sentences of up to six years on offenders.

“This draft law contains some good provisions and should be improved in parliament rather than delayed further.”