Posted on: June 6th, 2012 by Mayowa Aderinto No Comments

Tunisian journalist on hunger strike after police seized his cameras 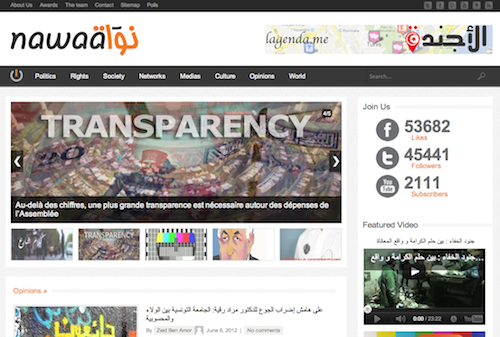 A Tunisian journalist started a hunger strike on May 28 after military police seized the cameras he used to film the trial of ousted leader Zin el Abidine Ben Ali. Ramzi Bettaieb, who works for Nawaat, a collective blog, said his cameras were confiscated on May 21 when he filmed the trial of Ben Ali and 22 other accused in the northwestern town of Kef over their role in crushing anti-regime protests, writes AFP.

“The soldier who deprived Ramzi of his work equipment is depriving us Tunisians of the right to information,” a colleague wrote. The army however said there was a ban on filming the hearings.

Bettaieb says he wanted to highlight the plight of those whose relatives were killed in the crackdown by the Ben Ali regime to stifle the revolt, which claimed some 340 lives and saw nearly 2,200 injured, according to the government, says AFP.

Ben Ali, who fled to Saudi Arabia after being toppled in a popular uprising, last year, is being tried in absentia. His co-accused are ex-senior officials being prosecuted for the deaths of at least 22 people during the January 2011 pro-democracy protests in the towns of Thala and Kasserine. Many of the victims died when security forces fired live rounds.