Posted on: June 1st, 2013 by AlYunaniya Staff No Comments 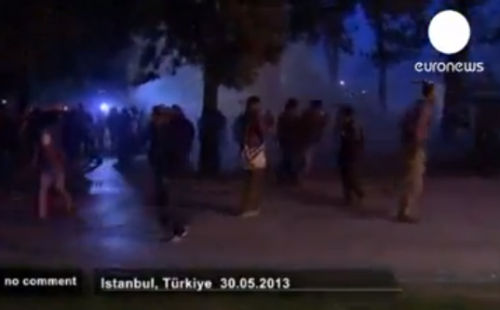 The Turkish authorities must order police to stop using excessive force against peaceful protesters in Istanbul and immediately investigate alleged abuses, said Amnesty International after more than a hundred people were injured during an ongoing peaceful demonstration in a city centre park.

On 30 and 31 May, police officers used water cannon and tear gas to disperse a peaceful protest against the destruction of Gezi Park in central Istanbul.

More than a hundred protesters are reported to have been injured during police interventions. Some suffered head injuries and at least two people had to receive emergency surgery.

Amnesty International activists who were observing the protest were also hit with truncheons and tear gassed.

“The use of violence by police on this scale appears designed to deny the right to peaceful protest altogether and to discourage others from taking part” said John Dalhuisen, Director of Europe and Central Asia Programme at Amnesty International.

“The use of tear gas against peaceful protestors and in confined spaces where it may constitute a serious danger to health is unacceptable, breaches international human rights standards and must be stopped immediately.”

“The Turkish authorities must order police to halt any excessive use of force and urgently investigate all reports of abuse. They have a duty to ensure that people can exercise their right to free expression and assembly.”

On Friday afternoon, riot police were preventing access to Gezi Park but an estimated 4,000 people were continuing their protest in the area. Police reportedly continued their use of water cannon to repress the protest. A further protest has been called for 7pm local time on Friday evening.

“Any decision to forcefully disperse a peaceful protest should be taken only as a last resort, and police intervention should always be measured,” said John Dalhuisen.

Protests against the closure of Gezi Park began on 28 May with a few hundred activists taking part initially.

The park is facing demolition to make way for the construction of a shopping centre as part of a large scale regeneration of the area.

Four weeks ago, police in Istanbul used excessive force to disperse a May Day demonstration.