‘Two Pack’ approved: Is democracy chased away from Brussels? – comment 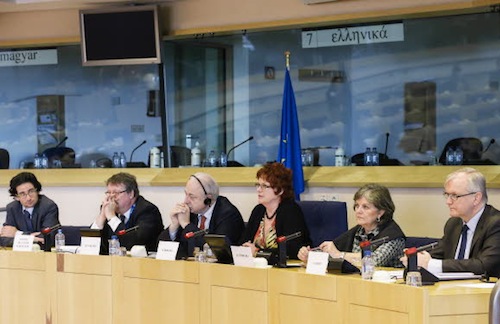 Yesterday, the Presidency of the European Council came out triumphantly announcing an agreement with the European Parliament, over the so called ‘Two Pack’ Commission’s proposal, to ‘improve’ budgetary and economic coordination among Eurozone countries. The Irish minister of Finance, Michael Noonan, president of the ECOFIN Council, said he achieved that on behalf of EU member states. It was evident that the whole affair was eagerly promoted by Commissioner Ollie Rehn. This last one didn’t lose either the opportunity and also issued a statement congratulating the Irish Presidency on this ‘achievement’.

Theoretically, this is a trilateral agreement between the Council, the Commission and the European Parliament. Given however, that the first two bodies were the powerhouses behind the “Two Pack” affair, it was only the legislature’s agreement that was missing. That is what Rehn and Noonan celebrated yesterday.

On the other side of the fence, the Parliamentarians didn’t seem to celebrate much. Actually, the Parliament’s rapporteur for the rules dealing with countries in significant financial trouble, Jean-Paul Gauzès (EPP, FR) found the opportunity to tell the Commission and the Council that the needed measures are being decided with a three years delay. He stressed that, “This crisis has shown us that half-hearted actions will not stop a fire. With such rules in place three years ago we would have avoided the problems currently experienced by some countries and which have threatened the whole Eurozone since it would have been possible to take early, clear and quick actions”.

The economic crises of the recent years showed that while European countries shared a common currency, their economies were not sufficiently coordinated. The ‘Two Pack’ is the response, introducing new rules to enforce stabilisers on Eurozone countries budgets. In 2011, six new sets of rules, the so- called ‘Six Pack’, came into force to strengthen economic coordination among EU member states. The 17 Eurozone countries, however, needed further rules – these are in the “Two Pack”.

The main difference between the “two” and the “six” packs is nothing less than the national sovereignty. The first one has been designed especially for the Eurozone and briefly concedes the approval of the national state budgets to the Brussels’ Commission. In short, government budgets in the 17 Eurozone countries will be submitted to national Parliaments after the Commission has given its approval.

This most important law, however, that the 17 legislatures are debating every year will be submitted after the Commission has approved the text. There goes out of the window, any democratic accountability, given that the Commission as a body is not accountable to the people, nor the Commissioners are elected by the people and probably do not always work for the people.

The European Parliamentarians didn’t chew their words. Elisa Ferreira (S&D, PT), rapporteur on the budgetary reporting requirements for all Eurozone countries, argued that this legislation needed to address a broader political context than one focused on fiscal discipline.

“Austerity is not delivering the desired results so it cannot be the only component of our response to the crisis. We need to adapt the medicine. We need to rebalance our short term objectives to better address growth and the vicious spiral of high debt-financing interest rates. Countries now making superhuman sacrifices need to know that their efforts are recognised and will be rewarded. This is why we have pushed hard to adapt the Commission’s original proposals”, she said.

The question is though, if those amendments the European Parliamentarians agreed with the Commission, are enough to protect the Peoples of Eurozone from the Commission’s discretional powers? In reality the amendments brought about by the Parliament are of minor importance not changing the substance of the “two pack”, which is the loss of national sovereignty.

As a matter of fact, the EU Parliamentarians depend greatly for their election on their home political party chiefs and governments and, as a result, they rarely push their objections to the end. European Parliament voting procedures are open for everybody to see who votes for what and this is not at all democratic.

In this case, the press release issued by the European Parliament contains this deplorable paragraph: “Where countries are asked to make substantial cuts, their efforts must not harm investments in education and healthcare, particularly in countries in severe financial difficulty”. As if today’s problems in Greece, Spain, Portugal, Italy and Ireland were education and health care. It is a totally populist reference, to hide the real issue which is the huge income losses for tens of millions of people.

In short, the green light from the European Parliament for the “two pack”, without any changes in its basic provisions, opened a new era in the European Union, of less and less democratic accountability and more and more democratic deficits. And this without a new Treaty being signed or anything that could signal fundamental changes and attract the attention of the many. Everything was done away from the eyes of the people in a freezing Tuesday morning in central Brussels. In reality, the Peoples of the EU are now pushed into something quite different from what they knew so far, without much discussion or a referendum. Nobody in Brussels speaks any more about plebiscites.