Posted on: June 16th, 2013 by Dimitris Ioannou No Comments 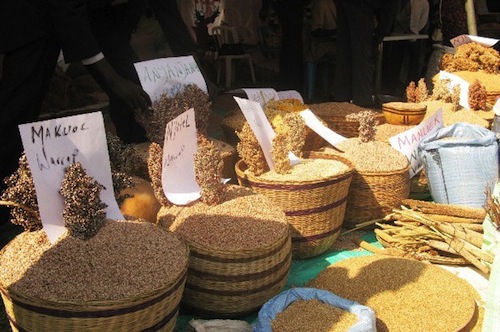 The biannual Food Outlook published by the UN Food and Agriculture Organization (FAO) states that countries are estimated to spend $1.09 trillion to import food this year, hovering near last year’s level but 13 per cent below the record in 2011.

The greatest changes to the import bill costs of importing animal-protein products, which includes meat, dairy and fish, may increase as much as eight per cent to around $543 billion, dependent on larger volumes of imports as well as prices, particularly for dairy products and fish.

These increases to the bill could likely be offset by anticipated lower international prices for sugar and vegetable oils, as well as on beverages such as coffee, tea and cocoa.

The UN food agency said its Global Food Consumption Price Index has registered little movement since the end of last year, in contrast to the volatility of earlier months.

Cereal harvests forecast is expected to surge to a record 2,460 million tonnes in 2013, pointing to “a more comfortable” cereal supply-and-demand balance in the new season, according to the report.

This year’s forecasted cereal production could be 6.5 per cent up from last year’s reduced level, FAO reported, supported by higher global wheat output, rice production, and a sharp expected rebound in maize harvests and use, particularly for feed and industrial purposes, in the United States.

“Based on current supply and demand prospects, by 2014, world cereal inventories could register an 11 per cent recover to 569 million tonnes, the highest level in 12 years,” the report cited.

The resulting world trade in cereals is expected to reach 306 million tonnes, similar to this season’s level.

“Buoyant demand in developing countries for has driven world aquaculture production to new heights,” authors of the report said, adding that consumption is down in the traditional markets.

Fish for direct human consumption will also increase significantly during 2013 as a smaller share of captures is destined for fish meal production. On a per capita basis, global fish consumption is approaching 20 kg a year. Prices on a number of farmed species, such as salmon, shrimp and selected bivalves, have risen sharply, according to the report.

Demand for meat production is expected to grow more in developing countries, with the global outlook remaining modest. Meat prices have been historically high since early 2011.

World meat production is forecast at 308.2 million tonnes in 2013, a modest increase of 4.3 million tonnes, or 1.4 percent on 2012. While producers in many countries continue to face high feed prices, these started falling in 2012, and could further diminish in 2013.

World trade in dairy is expected to expand, but not by much due to limited supply. International prices of dairy products registered strong growth during the first four months of 2013, particularly in March and April, and high prices are expected for the next few months. The main cause of the price surge was a steep fall-off in New Zealand’s milk production.

Sugar production is expected to rise in 2012-2013 by 2.8 percent to 190 million tonnes, surpassing consumption for a second consecutive season. The surplus is likely to hover around 6.5 million tonnes. Increased production in Brazil, United States, Australia and China is anticipated to offset declines in India, the EU and Thailand.

This year’s Food Outlook has a special report on quinoa, coinciding with 2013 having been declared the International Year of Quinoa by the UN General Assembly.

“World demand is expected to keep growing vigorously in the coming years, driven primarily by developed countries, where expenditure on healthier and natural foods is on an upward trend,” the report said.