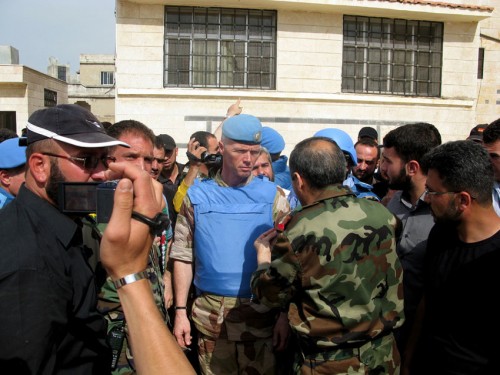 The chief United Nations observer in Syria has called on parties to evacuate civilians trapped by the escalating violence from the city of Homs and other combat zones.

“The parties must reconsider their position and allow women, children, the elderly and the injured to leave conflict zones, without any preconditions and ensure their safety,” General Robert Mood, head of the UN Supervision Mission in Syria (UNSMIS), said in a statement issued on Sunday.

“This requires willingness on both sides to respect and protect the human life of the Syrian people,” he added.

Yesterday Gen. Mood announced that UN observers had suspended their monitoring activities owing to an intensification of armed violence across the country in recent days.

He said in today’s statement that attempts to extract civilians from the line of fire over the past week in the city of Homs have been unsuccessful.

“I call on the parties to take immediate action to ease the pain of Syrians trapped in the violence and the UN Supervision Mission in Syria stands ready to monitor their release, once the decision is taken by the parties,” he stated.

Meanwhile, Syrian forces have increased their shelling of rebel-held neighbourhoods in the central city of Homs as living conditions there deteriorate further, according to opposition activists, Al Jazeera reported.

Activist Abu Bilal in the Old City said on Sunday that the regime’s siege of several parts of Homs was “suffocating”.

The Syrian Observatory for Human Rights has urged the UN to intervene and evacuate more than 1,000 Homs families, including women and children, according to Al Jazeera.

About 300 observers are deployed in Syria, entrusted with monitoring a ceasefire and supporting the full implementation of a six-point peace plan drafted by UN-Arab League envoy Kofi Annan, which was supposed to