UN must be given immediate access to investigate Syria killings – Amnesty Int. 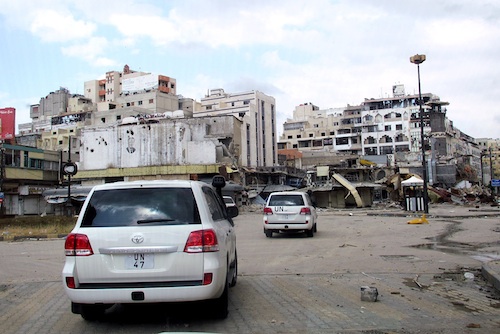 Reports of mass killings in the Sunni town of al-Treimseh (or Tremseh) are further proof of the urgent need for UN monitors to be granted full and immediate access to all parts of the country to conduct independent investigations into human rights abuses, Amnesty International said yesterday.

According to Syrian opposition sources, scores of people were killed on Thursday morning when the Syrian army and security forces along with pro-government militia known as Shabiha, attacked al-Treimseh near the city of Hama. Syrian state-run media have blamed “terrorist groups” for the killings.

UN mission chief Major General Robert Mood said today that UN observers are ready to go to Treimseh when a ceasefire is in place. He confirmed continuous fighting yesterday in the area of Treimseh, including the use of mechanized units, indirect fire and helicopters and said that observers were ready to go and seek verification of the facts if and when there was a credible ceasefire.

“The UN must be allowed unfettered access to investigate such incidents,” said Ann Harrison, Amnesty International’s Middle East and North Africa Deputy Programme Director. “Without an independent presence to investigate the facts, it is impossible to verify what really happened.”

“Nonetheless, we know that a pattern of abuses has been widely reported in many areas where government forces have indiscriminately shelled towns and villages, unlawfully killing civilians, followed by incursions by the shabiha militia who have killed not only opposition fighters, but also many civilians, mainly men and boys.

“The findings of our recent field investigations in Syria, verified this pattern. Amnesty International documented evidence of grave violations, including crimes against humanity and war crimes, committed by the Syrian army in towns and villages around Idlib, Aleppo, Jebel al-Zawiyah and Jebel al-Wastani areas.”

Amnesty International said that the resolution renewing the United Nations Supervision Mission in Syria (UNSMIS) should explicitly include a strong and adequately staffed human rights component, providing the mission with sufficient expertise, including gender and children’s rights experts, and other resources to document and report on crimes against humanity, war crimes and other grave human rights abuses committed by all sides.

“UN human rights monitors should have a rapid reaction capability to investigate specific incidents and a permanent presence in cities outside Damascus,” said Harrison.

“The UN Security Council should also require UNSMIS to regularly and publicly publish its findings on human rights violations and provide the human rights component with the necessary capacity to do so.”

“The UN Security Council must refer the situation to the prosecutor of the ICC. It has been evident for months that crimes under international law are being committed on a mass scale. An ICC referral will make clear to all sides that those who order or carry out war crimes and crimes against humanity will be brought to justice,” said Ann Harrison.