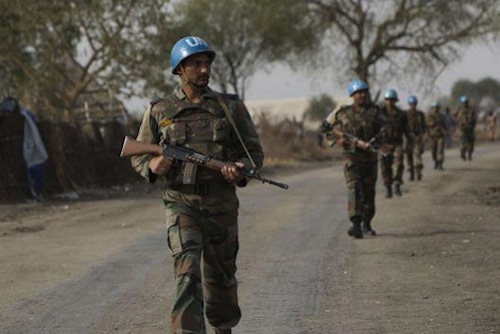 The United Nations Mission in South Sudan (UNMISS) has strongly condemned an attack that left one of its peacekeepers wounded during a patrol in the eastern state of Jonglei.

The peacekeeper was wounded when an unidentified armed group fired on an UNMISS patrol that was moving from Gurmuk to Pibor, UN spokesperson Eduardo del Buey told a news conference in New York.

“The peacekeeper has been evacuated to Juba for further medical treatment. His situation is stable,” he stated.

“The Mission strongly condemns this attack against its personnel and calls on all parties to respect the freedom of movement of UN personnel carrying out their mandate and to cooperate with the peacekeepers in their efforts to protect civilians and help establish a stable security environment in Jonglei state.”

Jonglei is the largest state in South Sudan and has been the scene of inter-communal violence since the country became independent from Sudan in July 2011.

The UN Security Council set up UNMISS in July 2011 to consolidate peace and security, and help to establish conditions for development in the world’s youngest nation.