Posted on: August 8th, 2013 by AlYunaniya Staff No Comments 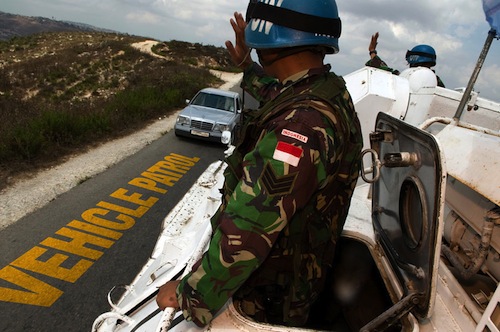 The United Nations peacekeeping force monitoring the Israeli-Lebanese border said it has opened an investigation into an incident involving an explosion that injured several soldiers belonging to the Israeli Defence Forces (IDF).

In a statement issued to the news media, the UN Interim Force in Lebanon (UNIFIL) said it was informed by the Lebanese Armed Forces (LAF) that an IDF patrol had crossed the so-called Blue Line separating the two countries two days ago in the general area of Labouneh and that there had subsequently been an explosion.

UNIFIL immediately launched an investigation into the alleged violation of Security Council resolution 1701, which ended the 2006 war between Israel and the Lebanese group Hizbollah, and calls for respect for the Blue Line, the disarming of all militias in Lebanon, and an end to arms smuggling in the area.

“A UNIFIL investigation team is currently at the location indicated by LAF. Our effort is to ascertain if any traces of a possible explosion or other activity can be identified on the ground,” the mission stated. “At the same time, we have asked the IDF to provide us details of any incident in the area as alleged and, if so, its precise location,” UNIFIL added.

Established in 1978, UNIFIL is tasked with ensuring that the area between the Blue Line and the Litani River is free of unauthorized weapons, personnel and assets. It also cooperates with the LAF so they can fulfil their security responsibilities.