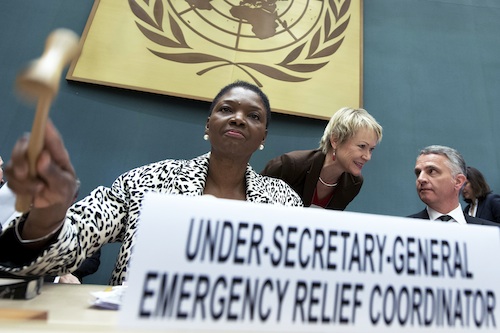 Nearly $13 billion is needed this year – about a third of that amount for Syria and its neighbouring countries – to provide aid to 73 million people, the top United Nations humanitarian official said.

“That’s an extra $8.6 billion to raise by the end of the year,” Under-Secretary-General for Humanitarian Affairs, Valerie Amos said from Geneva as she gave a snapshot of the Organization’s mid-year humanitarian assessment.

Calling 2013 an “extraordinary year,” Ms. Amos, who is also the UN Emergency Coordinator, stressed that millions of people around the world desperately need help feeding their families, treating malnourished children and getting safe drinking water and other essential supplies. “We need to support them.”

At least $4.4 billion of the budgeted need is for crisis-riven Syria where some 5,000 people are being killed every month. According to the UN, the two-year conflict has also sparked the worst refugee crisis for 20 years, with an average of 6,000 people a day fleeing the country in 2013.

In addition to Syria, the UN Office for the Coordination of Humanitarian Affairs (OCHA), which Ms. Amos heads, and its partners are working to help people in Afghanistan, Central African Republic, Chad, Democratic Republic of the Congo, Niger, Sudan and Yemen, among others.

More than $5 billion has been provided for humanitarian organizations in 24 countries so far this year, Ms. Amos said.

While the situation worsened in some countries, the scale and severity of need has “eased a little” in others, such as Kenya, Mauritania and South Sudan, for which funding plans have been revised accordingly.

These consolidated appeals are used by some 620 UN agencies and non-governmental partners to plan their responses and monitor the situation and impact of their work, Ms. Amos noted.