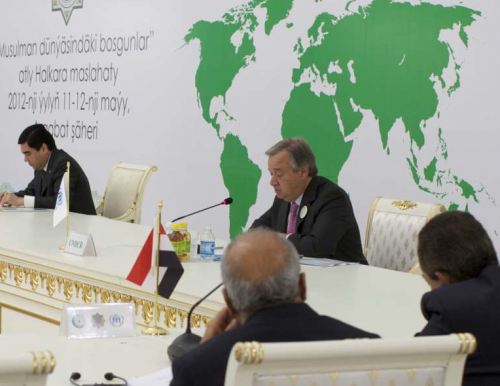 UNHCR and the Organization of Islamic Cooperation (OIC) completed a two-day international ministerial conference on refugees in the Muslim world in Turkmenistan, yesterday.

The conference, organized jointly by the OIC and UNHCR is the first ministerial-level meeting to deal specifically with the issue of refugees in the Muslim world.

The OIC’s 57 member states, non-member states, NGOs and international organizations participated in the event and shed light on the hospitality and assistance extended by OIC member states to refugees and asylum-seekers, according to UN.

“Islamic law and traditions embrace the principle of providing protection to those who seek asylum,” António Guterres, told delegates.

“It also forbids the forced return of those asylum-seekers. Both of these principles are cornerstones of international refugee law,”  he added in his address to the opening of the conference in Turkmenistan’s capital, Ashgabat.

Mr. Guterres noted that 50 per cent of those issues of concern to UNHCR last year were hosted in OIC member countries. That amounted to more than 17 million people, comprising refugees, asylum-seekers, returnees, internally displaced people and the stateless.

In addressing the Afghan refugee situation, now more than 30 years old, Guterres pointed to a regional solutions strategy agreed between Afghanistan, Iran and Pakistan and UNHCR, as a recent success. “Just as Afghanistan, Iran and Pakistan are forging a common vision and approach, there are other opportunities for a structured dialogue to promote solutions in other protracted refugee situations in the Muslim world,” he said.