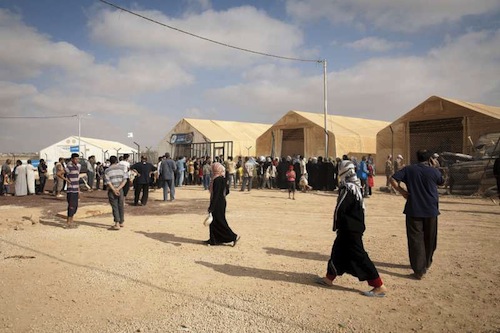 The UN refugee agency plans to expand a cash assistance programme utilizing ATM cards to 30,000 Syrian refugees by March after the recent completion of a pilot programme for 200 families in northern Lebanon.

The programme is aimed at benefitting the most vulnerable refugees registered with UNHCR and the money allowance will help them pay for daily living costs, including food, rent, transport, fuel and clothing, and thus become more self-sufficient.

Under the pilot programme conducted in the last week of January, each family received a minimum of US$150 plus an additional US$25 per family member. Under the expanded programme in the northern town city of Tripoli and the neighbouring district of Akkar, families will receive an average of US$240 a month.

The monthly amount was adjusted upwards based on data gathered during the pilot exercise. Under an agreement with a local bank, the refugees can withdraw money using ATM cards.

The refugees have no obligation to repay the money, which will also help them contribute to the local economy and thus assist the host community and enable the refugees to integrate more smoothly.

The influx of hundreds of thousands of refugees has helped push up prices and made life harder for all. Many families arrive in Lebanon with no financial resources while other have used up their savings. And unlike Turkey, Jordan and Iraq, there are no refugee camps in Lebanon, so many Syrians in Lebanon need help.

Refugees who took part in the pilot programme have welcomed the scheme. “It’s incredible to think that UNHCR is treating us in a way which gives us so much freedom and independence,” said Salam, a mother of two. “Do you know what this means to someone who has lost everything?” she asked, adding: “Dignity – this is what it gives us.”

As part of the pilot project, refugees in need of cash aid have been identified by UNHCR and its partners – field visits are a key part of the process, along with registration data, increased outreach, community mobilization and liaison with local authorities.

In one typical case, UNHCR staff found Talal living with his wife and six children in the attic of a bakery in Tripoli’s Beddawi suburb. “We live here because it is free. We have no money to go anywhere else,” said the Syrian as he crouched beside the only bed in a corner of the dark room. He was advised to register with UNHCR, which would make him eligible for support.

Samar, a widow and mother of three, has been living in a dilapidated house in one of Tripoli’s most impoverished neighbourhoods since fleeing to Lebanon from the Syrian city of Homs in June last year. She was reluctant to leave her two young daughters at home while she looked for work, so her 12-year-old son, Ali, became the family breadwinner, earning US$20 a week as a porter.

“It broke my heart every time he left for work,” recalled Samar, who was included in the pilot cash aid programme. With the monthly grant, Ali no longer has to work and can continue his education. “Ali can leave work now and focus on his school. In Syria he was the top of his class,” his happy and proud mother told UNHCR.