US Senate panel approves use of force against Syria 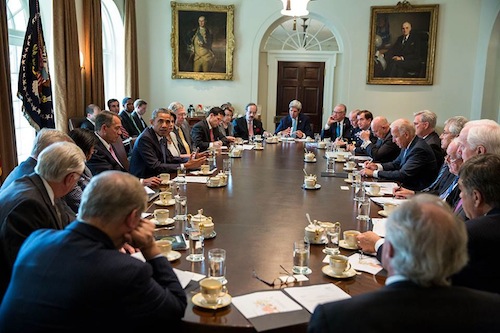 The U.S. Senate Foreign Relations Committee approved on Wednesday a resolution authorising the use of force against the Syrian government of for its alleged use of chemical weapons.

The resolution passed by a vote of 10-7 , with one senator voting “present”.

The vote by the panel clears the way for a vote on the resolution in the full Senate, most likely next week, according to Reuters.

“We have high confidence that Syria used, in an indiscriminate fashion, chemical weapons that killed thousands of people, including over 400 children, and in direct violation of the international norm against using chemical weapons. That poses a serious national security threat to the United States and to the region, and as a consequence, Assad and Syria needs to be held accountable,” US president Barack Obama said in a statement before meeting with members of Congress on Syria.

“I’ve made a decision that America should take action. But I also believe that we will be much more effective, we will be stronger, if we take action together as one nation,” he added.

The resolution would authorize President Barack Obama to order a limited military operation on Syria that wouldn’t exceed 90 days and involve American troops on the ground, Al Arabiya reported.

Meanwhile, the United Nations refugee agency and senior Government ministers from Iraq, Jordan, Lebanon and Turkey – countries which together host more than 1.7 million Syrian refugees – called today on the international community to “overcome differences” to stop the fighting in Syria, as the made an urgent appeal for expanded assistance to the region.

The joint statement follows a half-day meeting chaired by Mr. Guterres with representatives of the four countries that host the majority of the 2 million refugees who have fled Syria since March 2011. And additional 4.25 million people are displaced within Syria, according to UN figures.

UNHCR and its partners in June appealed to donors for $4.4 billion for Syria relief operations this year, including $3 billion to meet humanitarian and host community needs in the immediate surrounding region. About 40 per cent of this component has been funded.