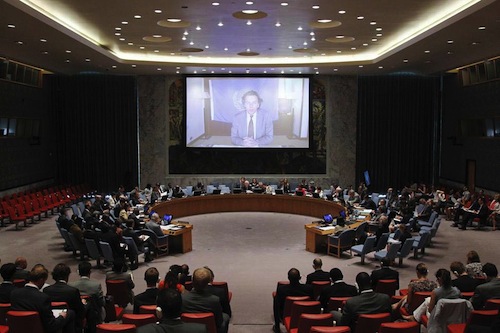 As the United Nations prepares to take over from the African-led mission in Mali, top officials called on Member States to contribute critical resources, including personnel and equipment, to ensure that the world body can support the country with key tasks such as implementing the recent ceasefire accord and preparing for next month’s elections.

“The success of these activities will depend on key confidence building and assistance to put Mali on the path of stability,” said Bert Koenders (photo), the Secretary-General’s Special Representative for Mali and head of the new UN Multidimensional Integrated Stabilization Mission in Mali (MINUSMA).

Briefing the Security Council by video-link from the Malian capital, Bamako, Mr. Koenders updated the 15-member body on the security situation, the mediation and national reconciliation process, the preparations for the 28 July presidential elections; and the humanitarian and human rights situations.

He also called on Member States to fully support the UN mission and contribute “critical and immediate” resources, military and police personnel, and key enablers.

The transfer of responsibility from the African-led mission, known as AFISMA, to MINUSMA is expected to take place on 1 July, when the bulk of the military units in the former will be ‘re-hatted’ and transferred to the latter.

The new mission, set up by the Council in April, is tasked with supporting the political process in Mali, which is recovering from a conflict between Government forces and Tuareg rebels that uprooted hundreds of thousands of people since January 2012.

The Council has also authorized MINUSMA “to use all necessary means” to carry out security-related stabilization tasks, protect civilians, UN staff and cultural artefacts, and create the conditions for the provision of humanitarian aid.

“There was unanimous agreement by Security Council members that we should move to the next phase of Mali’s recovery with the deployment of MINUSMA from the 1st of July, which in the initial stages, obviously will mean a re-hatting of most of the AFISMA troops,” Ambassador Mark Lyall Grant of the United Kingdom, which holds the Council’s presidency for this month, told reporters after the meeting.

In his recent report to the Council, Secretary-General Ban Ki-moon wrote that there remain “many challenges” to a smooth transition from AFISMA to MINUSMA. “The initial focus will be on maintaining seamless continuity between the two operations to preserve the security gains made to date and avoid creating any vacuums,” he stated.

“We count on the continued support of both our traditional and new troop-contributing countries to help us fill these critical shortfalls,” said Mr. Ladsous, who added that the UN is deploying a mission in a new geopolitical context with asymmetric threats not previously encountered in a UN peacekeeping environment.

Among the “unique challenges” facing the mission, he cited the harsh climate, state of infrastructure and vastness of the geographic area of responsibility.

Briefing the Council on the ongoing efforts to set up the mission, Under-Secretary-General for Field Support Ameerah Haq said that despite “formidable” constraints, the UN is on track to meet requirements for the MINUSMA’s deployment.

Yet, she acknowledged that MINUSMA is “one of the most logistically challenging missions the United Nations has ever launched.” Among others, she drew attention to the “harsh” climatic conditions in northern Mali, where most of the mission’s operations will be located. The temperature in Timbuktu, for example, regularly reaches 48 degrees Celsius, or 120 degrees Fahrenheit.

“All information and communications technology, vehicles, refrigeration, and tentage that is ultimately used in Mali will be exposed to climatic conditions that accelerate their decay,” she explained.

“We already know that certain technological options are out of the question: for example, we are unable to deploy our mobile communications system to Kidal because its sensitive components will melt.”

Ms. Haq also noted that water availability is limited, particularly in the arid north; the airfields in the north are unable to service large aircraft; road infrastructure in the north is “spotty;” and there are still armed groups who have sworn to oppose – and attack – the UN.

“In Mali, neither the challenges nor the risks at hand should be underestimated. Much is beyond our control,” she stated. “But our efforts to date, and the results achieved by MINUSMA thus far suggest that, with commitment, vision and the continued support of Member States, we just may be able to beat the odds.”

In his meeting with Mali’s Foreign Minister, Tiéman Coulibaly, Mr. Ban encouraged the authorities to continue efforts to ensure a favourable political environment for the conduct of the 28 July polls, and pledged UN support for the national dialogue process that will take place following the elections.