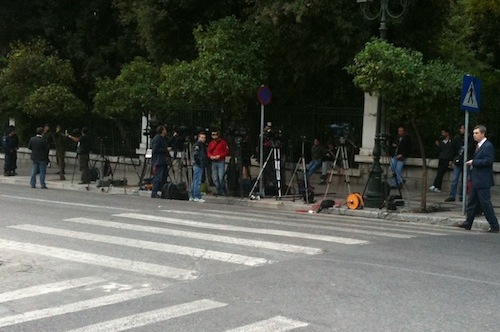 It is definitely the end of an era. A distorted media market is following local old politics to its end. The difference is that politics can find the way up. Traditional media will not. They are in debt, financially, as well as in terms of credibility. Newspapers are closing down, TV stations have no – economic – reason to exist, magazines are vanishing. The daily political newspaper market is on a death row, with around 60% losses in copy sales throughout the last 15 years. Sunday editions are losing ground as well. Two Sundays ago, when consumer offers stopped from Sunday editions, the fall scared newspaper proprietors. The Sunday that follows, the scare was evident; a Sunday edition advertised a free offer of LOST’s complete season 1 episodes, in an attempt to attract “readers”.

Soon, there will be no daily editions, at least on paper. Weeklies will be strengthened to create cash flows, necessary for news organisations to survive. Of course, structural cuts will have to wait until after the elections, since campaign budgets are rolling since after a Parliament decision, new money was channeled to political parties (and their advertisers and PR specialists)… At the same time, major television stations continue to suffer from a long lasting strategy that favored low quality competition, built upon a star system of well paid tele-personas. This is dead too.

Only 5 years ago, announcements on internet penetration in the country used to be news. Today, broadband connectivity has transformed the news market, allowing a new wave of online investments to take place. However, the crisis has turned online growth to more opportunistic than strategic. Small groups of journalists and prominent media figures are creating websites that remind first generation attempts in foreign mature markets. There is an absolute lack of innovation, even in design and layout arrangements. These ventures reflect the agony of the profession to place itself in the new web advertising market, which is about to take off, as soon as fiscal finances in Greece appear to be stable and entrepreneurial climate starts to improve.

In the last 6 months, around a dozen of ‘major’ news web sites have appeared in the Greek internet market, already causing an inflationary effect in the free news content sector. None of these relies on parameters that could fall under the category of innovation. And this is the main reason why the leading ones are those advertised by mainstream channels, television and billboards. In the first case since their owners are television personas, in the second, because owners can afford it.

The growth of internet news/content market in Greece resembles the chaotic development of private TV stations in the country, 20 years ago. This time, however, the chaotic approach is not due to the rebellious nature of the new media. It simply lacks strategy, confusing readers and advertisers. These things are about to change…