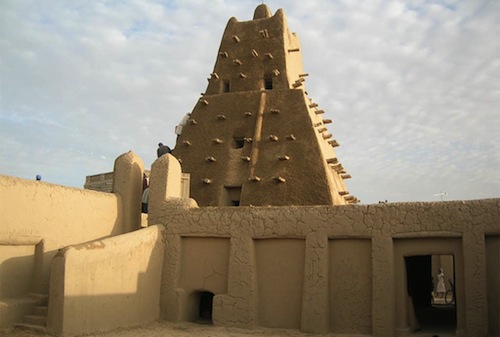 The World Heritage Committee has condemned the destruction of sites in Mali – including in the fabled city of Timbuktu – and decided on measures to help the country protect its heritage, including the creation of a special fund to help the West African country conserve its cultural heritage.

“The decision strongly condemned the acts of destruction of mausoleums in the World Heritage property of Timbuktu and called for an end to these ‘repugnant acts,” the United Nations Educational, Scientific and Cultural Organization (UNESCO) said in a news release today.

Fighting between Government forces and Tuareg rebels resumed in northern Mali in January. The instability and insecurity resulting from the renewed clashes, as well as the proliferation of armed groups in the region, and a deepening crisis due to a coup d’état in March, have uprooted nearly 320,000 people, with many of them fleeing to neighbouring countries.

There had been reports earlier this year of rebel groups looting centres containing thousands of ancient books and documents in Timbuktu. In addition, there have been reports of the destruction of three sacred tombs – the Mausoleums of Sidi Mahmoud, Sidi Moctar and Alpha Moya – that are part of the Timbuktu site, which was an intellectual and spiritual capital and a centre for the propagation of Islam throughout Africa in the 15th and 16th centuries.

The 21-member Committee came to its decision yesterday in St. Petersburg yesterday, where it has been holding its 36th session. It meets once a year, and is responsible for the implementation of the UNESCO World Heritage Convention, which defines the kind of natural or cultural sites which can be considered for inscription on the World Heritage List.

Late last week, it had accepted a request from the Government of Mali to place Timbuktu, as well as the Tomb of Askia, on the List of World Heritage in Danger, which is designed to inform the international community of threats to the outstanding universal values for which a property has been inscribed on the World Heritage List, and to encourage corrective action.

The Committee also asked Mali’s neighbours to help prevent the trafficking in cultural objects from the sites, and urged the African Union and the international community to do everything possible to help protect Timbuktu, inscribed on UNESCO’s World Heritage List in 1988.

Over the past few days, UNESCO’s Director-General, Irina Bokova, Secretary-General Ban Ki-moon and the President of the General Assembly, Nassir Abdulaziz Al-Nasser, have expressed their concern over the situation in Timbuktu, and condemned the attacks which damaged the mausoleums.

In its decision made in St. Petersburg, the World Heritage Committee called on UNESCO’s Ms. Bokova to create the special fund for Mali, and appealed to all UNESCO Member States, the Islamic Educational, Scientific and Cultural Organization, and the Organization of Islamic Cooperation (OIC) to provide financial resources to the fund.

The Committee also asked that Ms. Bokova send a mission to Mali, when possible, with a view to assessing, together with national and local authorities concerned as well as the local authorities, the extent of the damage and destruction and define urgent conservation needs.

The Committee recognized efforts already undertaken to help Mali safeguard its heritage, and the efforts of the Economic Community of West African States and the countries of the region to help the people of Mali resolve its crisis.

Earlier this year, UNESCO and the Government of Mali defined measures to safeguard World Heritage Properties in the country’s north – including Timbuktu – following reports of wilful damage to mausoleums at the site.

The agreed-on steps included Mali finalizing its accession to the 1999 Second Protocol to the Hague Convention of 1954 for the Protection of Cultural Property in the Event of Armed Conflict, which, amongst others, penalizes the intentional destruction of cultural heritage. Malian authorities had also requested the inscription of Timbuktu and the Tomb of Askia on the Committee’s List of World Heritage in Danger – which it did in late June.

Mali will also draft a report on priority measures for its World Heritage sites, in line with international heritage conventions, and it will request technical and financial assistance from UNESCO and the international community.

For its part, amongst other actions, UNESCO agreed to help the Government of Mali in reinforcing protection for all of its cultural properties, and raise awareness in neighbouring countries and among the international community of the situation to help fight the illicit trade in cultural artefacts.