Posted on: August 17th, 2013 by AlYunaniya Staff No Comments

Wrapping up Middle East visit, Ban hopes 2013 will be ‘decisive’ year for peace 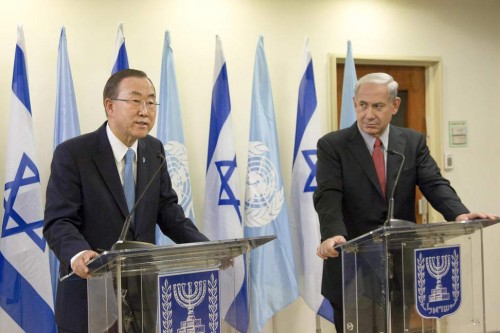 Secretary-General Ban Ki-moon yesterday, on a visit to Jerusalem, stressed his full support for direct negotiations between Israelis and Palestinians, and voiced the hope that this year will be a decisive one for peace in the Middle East.

“I am encouraged that Israelis and Palestinians have re-engaged in direct dialogue. But for these negotiations to have a chance at success, they need to be meaningful,” Mr. Ban said at a joint press conference with Prime Minister Benjamin Netanyahu.

“I know that when a problem has remained an open wound for decades, causing hardships and casualties on both sides, it might sometimes seem that the problem will never be solved,” he continued.

“Dealing [with] the symptom might seem easier in the short term. It takes courage, vision, and creativity to decide that the long-term cost of that problem is actually too high. That is what is happening now with the Israeli-Palestinian issue.”

Direct negotiations between the Israelis and the Palestinians stalled in September 2010, after Israel refused to extend its freeze on settlement activity in the occupied Palestinian territory. Following recent efforts by United States Secretary of State John Kerry, the two sides resumed negotiations this week.

“I am here to urge all the leaders to continue along the path to peace and to underscore a shared commitment to work together to make 2013 a decisive year for Israeli-Palestinian peace and peace in the region,” stated Mr. Ban, who is visiting Israel for the sixth time as Secretary-General.

In addition to Mr. Netanyahu, Mr. Ban also met with Israeli President Shimon Peres. Speaking to reporters along with Mr. Peres, the Secretary-General noted that direct negotiations remain the “single most credible path” to a solution.

He also urged all parties to avoid actions that risk undermining the negotiations. “Both sides need to sustain an environment conducive for the peace process to move forward. People need to see improvements on the ground, including economic progress for Palestinians in the West Bank and Gaza, and greater security for Israelis and Palestinians.”

Mr. Ban also held meetings with Justice Minister Tzipi Livni, Defence Minister Moshe Yaalon and the Leader of the Opposition, Shelly Yachimovich. A separate meeting with Ambassador Martin Indyk, the US Special Envoy for the Israeli-Palestinian Negotiations, covered the resumption of direct negotiations between the parties.

In addition, Mr. Ban took part in an Israeli Model UN event at the UN headquarters in Jerusalem, at which he said students everywhere should have both passion and compassion, and lift their vision beyond boundaries. While at the UN headquarters, the Secretary-General met the new head of the UN Truce Supervision Organization (UNTSO), Major-General Michael Finn.

Also today, Mr. Ban visited the grave site on Mount Herzl in Jerusalem of former Prime Minister Yitzhak Rabin, who the UN chief noted lived through the war to become “a champion of peace and security” for Israel and the region.

“As Secretary-General of the United Nations it is a great honour for me to work together with the people of Israel to build upon his legacy,” Mr. Ban said, adding that he hoped that both parties, Israelis and Palestinians, will remember Mr. Rabin’s legacy and realize a two-State solution.

Mr. Ban’s two-day visit to the region also took him to Jordan and Palestine.