Youth turn to green jobs as an answer to unemployment 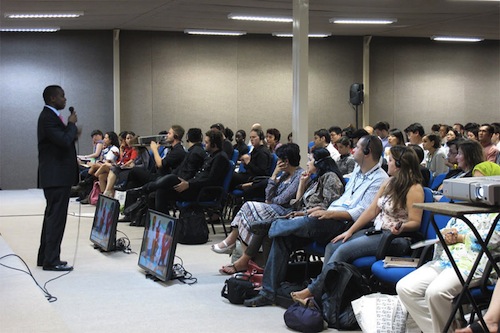 With over half the world population under 25 years of age and the global economic crisis still ongoing, the creation of jobs that provide decent incomes, help reduce the impact of economic activities on the environment, and offer adequate working conditions is a main priority for young people participating at the United Nations Conference on Sustainable Development (Rio+20).

“Many young people are finding it very difficult to integrate into the economy, but there are opportunities and things are being done,” said the Director of Job Creation and Enterprise Development Department at the International Labour Organization (ILO), Peter Poschen, at a side event organized by the UN Environment Programme (UNEP) yesterday in Rio de Janeiro.

“Finding new ways of thinking about development and how it can create jobs is important to ensure that in the long-term young people have access to a better future.”

During the event, representatives from governments, UN officials and young people discussed the situation that the latter face today and what needs to be done so they can have access to jobs that offer adequate social protection and that are not at odds with the environment.

“Every young person, including me, thinks the opportunities are out there, not within us or around us, and we have this quest to go and see it,” said John Wali, a youth activist from Kenya taking part in the event, who has been working on projects to help young people set up their own enterprises.

One of the main issues discussed was the need to provide youth with the right skills to engage in a green economy. In an interview with the UN News Centre, Mr. Poschen noted that many times there is a gap between the skills supplied by the workforce and those required by jobs in green sectors such as energy.

“There is a bottleneck in many countries and in many sectors in which the right qualifications are not available in the labour market for green sectors that are growing rapidly in the face of the economic crisis,” Poschen said. “So we have an ironic situation where, on the one hand, there is gaping unemployment among young people and, on the other hand, there are vacancies that have not been filled because people have not been trained.

Poschen stressed that green jobs must also offer social protection so that people work under fair and decent conditions and to ensure that they can absorb shocks like the economic crisis as well as climate-related disasters.

Felix Beck, a Rio+20 youth delegate representing Germany, said that this is one of the main concerns of young people in Europe. “We need to discuss how we can create jobs not just for the short term but also in the long term so we can have access to quality jobs because a lot of people are doing unpaid internships,” he said. “This is something that seems to be necessary to get a paid position, but right now many people are in a loop doing one unpaid internship after another, so this is really an issue.” Beck is also part of a non-governmental organization called Rio+20s, that has been trying to leverage the participation of youth in the lead-up to the Conference.

Many other side events at Rio+20 are also focusing on how youth can not only benefit from sustainable development policies but can actively contribute to the process. Rio+20 follows on from the Earth Summit in 1992, also held in Rio de Janeiro, during which countries adopted Agenda 21 – a blueprint to rethink economic growth, advance social equity and ensure environmental protection.