Posted on: May 29th, 2012 by Mohamed Benghuzzi & Julie Jalloul No Comments 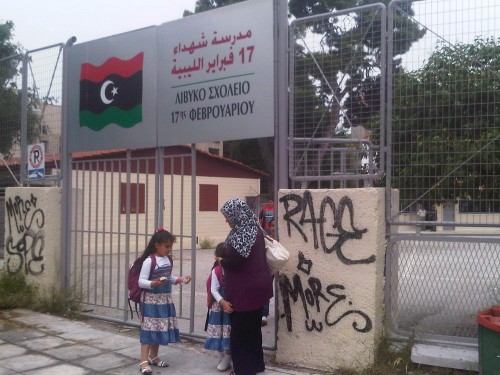 The formally called ‘7th of April’ Libyan School located in Greece now hears to the name the ‘17th of February’ in honor of the martyrs that fell during the Libyan uprising that toppled former leader Muammar Gaddafi.

The Libyan school in Greece, which is licensed by the Libyan government, has been operating since 1978. The school, which is sometimes referred to as the Arabic School as it hosts not only Libyan but also Arab students from different countries is the only Arabic-based school in Greece.

Q: Mr. Bargati what has striken our attention is the change in the name of the school. Why has the school’s name changed to 17th of February Libyan School?

A: We have changed the name to commemorate the martyrs that have fallen during the 17th of February revolution, which toppled Muammar Gaddafi.

Even though it is on the anniversary of this moving day important to remember that it is not all about the February 17 Revolution martyrs. Martyrdom for the Libyan Revolution started way back in 1976.

The formal name of the school, April 7 of 1976, was when Muammar Gaddafi supposedly won a revolution against university students opposing his regime, against “traitors of the country” as he called. April 7th was commemorated in Libyan universities annually, with arrests and public executions of students. In some cases, the killings followed years of imprisonment without trial.

Q: How was education in the Libyan school under Gaddafi?

A: Over his more than four decades of dictatorship, Gaddafi used the country’s schools to get his ideology into the minds of his people; it was a means of indoctrination. It wasn’t only his ideology; it was also his arbitrary decisions like changing the curriculum and bringing one from Singapore and applying it in the Libyan education.

Books like the Green book- a three part collection of political, economic, social studies were required readings for students.

Students who have graduated from Libyan school in Greece know only history from when Gaddafi lived. It’s as if world history started with him. Subjects like geography seem less problematic even though maps in Libyan books were used to confuse rather than inform the students. Even elementary books, which are suppose to have some pictures and look more appealing to little kids are horrible and tire students with unnecessary information.

I remember some of our little students use to glorify Gaddafi without knowing why.

Q: How is it possible that there is no freedom of speech in a school located in a  democratic country like Greece?

A: As I said, the school was clearly an indoctrination institution, designed to inculcate students a specific set of values and beliefs. These values and beliefs are ingrained in their minds. They learn to love Gaddafi without questioning. There was one student I remember you during the revolution kept chanting “Libya, Thuwar only” while his friends made fun of him and chanted “Libya Gaddafi”. Now that the power has switched he can express his opinion freely.

Q: What was the Libyan’s School role during the revolution?

A: Well, the Libyan school in Greece was maybe one of the first places in the world to take part in the uprising abroad. The revolution started on 17 of February and our students organized their first protest on 22nd of February. Just a few days after the uprising against Gaddafi began. At the beginning everyone was scared. We didn’t know what to do as the embassy was giving me orders to organize pro-government demonstrations. Ofcourse I did my best to prevent that. Soon students stormed the school at night with our concealed support to bring down the former flag of Libya. The national anthem chanted every morning with flattering tributes to Gaddafi was no more sung. Our students were repeatedly targeted from police which were ordered from the Libyan embassy to be arrested. Ofcourse I didn’t let them. From then eyes were on me. I knew well if this uprising wasn’t going to win I was going to be one of the first people hung by Gaddafi. I was getting threats all the time, they even stormed my house.

Q: What has changed since Gaddafi left?

A: Students are now returning to their studies and a school curriculum that needs a complete restoration. But the important thing is there is freedom. The school is now being cleansed of Gaddafi’s extensive influence. It is as if you are sifting sand, where all unnecessary debris is thrown away. We don’t want anything that signifies him neither his name, nor his signature green color. For now, the easiest change is getting rid of subjects like Al-Mujtama Al-Jamahariya, the study of the “Green Book” – Gaddafi’s core treatise on politics and civic life. But beyond that, many remaining subjects require severe changes. Students weren’t even taught history. History, which had amounted to glorifying Gaddafi and his regime, is being rewritten from scratch.

Our biggest goal is removing the false ideas and state of mind cultivated!  It is difficult to overcome the Gaddafi era.