$8.5 billion needed in 2013 to help millions in crisis-stricken countries around the world 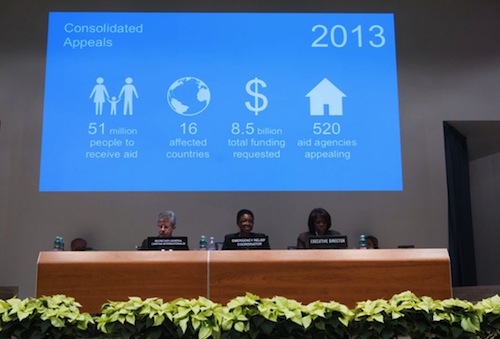 To deliver urgent humanitarian aid to 51 million people around the world in 2013, the United Nations and its partners asked for $8.5 billion to fund emergency response programmes for the year.

“As we enter 2013, there is no let-up in humanitarian needs in the world,” the Under-Secretary-General for Humanitarian Affairs and Emergency Relief Coordinator, Valerie Amos, told journalists in Rome after she and other senior UN and humanitarian aid officials launched the appeal.

She added of the people in need, “They are displaced from their homes, hungry, unprotected and vulnerable, living with the consequences of natural disasters and violent conflict.”

The funding call is made under the annual Consolidated Appeals Process (CAP) that, since its launch by the UN General Assembly in 1991, has become a central tool used by the world body and other aid organizations to plan, coordinate, fund, implement and monitor their activities.

This year’s total will fund emergency relief in 12 African countries, and another three in Asia, as well as the occupied Palestinian territory, according to a news release from the UN Office for the Coordination of Humanitarian Affairs (OCHA), which Amos also heads.

“Working jointly in these 16 countries, we are strengthening our response,” said the Executive Director of the UN World Programme (WFP), Ertharin Cousin, who joined Amos in launching the appeal.

“We are meeting the urgent need for food security and nutrition, shelter, water, health and other basic needs, while simultaneously helping communities recover from emergencies,” she added while also stressing that a “unified response can save lives and help communities become more resilient.”

In her remarks, Amos said the appeal was directed at governments, private individuals and businesses, among others, as she called on them to “contribute to saving lives in 2013.”

She highlighted that 520 UN agencies, non-governmental and other aid organizations had come together to launch the call with the aim to “deliver aid in an effective and coordinated way.”

She also noted how international responses both buttress and enhance local efforts, which she saluted, saying that communities, civil society organizations, businesses, local and national governments were the “first responders, and, throughout a protracted crisis, important providers of support and help.”

Amos detailed the pressing needs in some of those countries, saying that a million children in Yemen were suffering from acute malnutrition, 1.7 million people in Niger faced food shortages, and a half a million people driven from their homes in South Sudan needed help in addition to some two million people in that country who did not have enough to eat.

The humanitarian chief pointed to several more crises in Africa as she responded to one journalist’s question about the focus on that continent.

“I think many people have forgotten that there are continuing needs in Darfur,” she said of the western Sudanese region stricken for years by ethnic-based strife. She also highlighted humanitarian crises arising from recent strife in both Mali and the Democratic Republic of Congo.

“This means that people in need in some parts of the world have not been able to get the help they would have had we got the money,” Amos said, adding that it was too early to tell how the global financial crisis might affect funding levels this year.

“We will make the case in a vigorous way,” she added. “These needs are real; they can be seen by anyone; we recognize the difficulties that many countries face with respect to the ongoing situation, but, at the same time, we are talking about people who are extraordinarily vulnerable around the world.”

In response to a question about Syria’s exclusion from the 2013 CAP, Amos said that a separate revised appeal would be launched on 19 December for the Middle Eastern nation, where internal conflict has spawned massive humanitarian needs. She noted that a current appeal to help pay for humanitarian operations inside Syria is asking for $348 million.