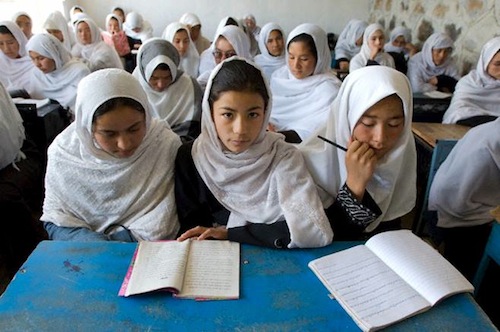 This week, reality struck home for Afghanistan over the Convention on the Elimination of All Forms of Discrimination against Women (CEDAW). Ratified by Afghanistan in 2003 during the early heady post-Taliban days when it seemed like a bright future for women was inevitable, CEDAW is a treaty that requires/demands gender equality in access to education, health care, and political participation. It is the basis for global efforts to end violence against women. The Afghan government is failing in many ways to live up to the commitment it made by signing on to CEDAW.

When you ratify a convention you don’t just get a pat on the back and then a pass on your obligations. CEDAW compliance is overseen by a committee of 23 experts, who spent hours Wednesday grilling the Afghan government delegation who showed up in Geneva to defend the government’s efforts on women’s rights. Committee members pointed out many of the issues Human Rights Watch highlighted in our written statement including that now, 10 years after CEDAW was ratified, numerous Afghan laws explicitly discriminate against women, including in one case a law passed since CEDAW was ratified – the Shia Personal Status Law. They also pointed out that even where the laws on the books are good, there are major failings in their implementation, including a majority of girls not in school, physical assaults including murder against women in public life, lack of accountability for violence against women, and on and on. Not to mention a real risk of backsliding as international support and interest dries up as the end-2014 international troop deadline approaches.

The Afghan government delegation answered some questions but dodged and downplayed many others (including refusing to address question of why the marriage age is lower for girls than boys, and rebutting the suggestion that women have no meaningful access to divorce by saying women can divorce husbands “for bad breath” ). The Afghan chair, Dr. Mohammad Hashimzai, a longtime senior member of the Ministry of Justice, said there is a real commitment across the government to implementing CEDAW. “Afghanistan faces so many challenges,” Dr. Hashimzai said. “But with the continued help of the international community and the help of this [CEDAW] Committee, we will succeed.”

Human Rights Watch will be watching closely to see how deep that government commitment really is – and whether the international community still cares about Afghan women after the military pull-out in 2014.