Posted on: July 16th, 2013 by AlYunaniya Staff No Comments 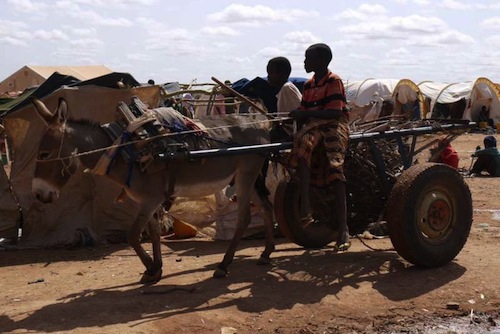 “The cash allows refugees to have more control in diversifying their diets, and they can buy milk, vegetables or pasta directly from the local market,” said Abdou Dieng, Country Director for the UN World Food Programme (WFP) in Ethiopia.

Refugees at Sheddar, located outside of Jijiga, the regional capital of the Somali area of Ethiopia, are now receiving a monthly ration of 13.9 kilograms of food – including wheat, rice, pulses, corn-soya blend, oil, sugar and salt – as well as a cash allocation of 100 Ethiopian Birr or the equivalent of $5 per person.

An additional 13,000 refugees will start to receive cash in the same region in October. The moves are part of a pilot initiative that will last until December.

The pilot project is part of an “excellent partnership”, Mr. Dieng said, between WFP, the UN refugee agency (UNHCR), the Government of Ethiopia represented by the Administration for Refugee and Returnee Affairs (ARRA) and the donor, European Commission Humanitarian Aid and Civil Protection (ECHO) which provided a contribution of $1.3 million.

Ethiopia, along with Kenya and Yemen, host most of the 1 million Somali refugees, who, along with some 1.1 million internally displaced persons (IDPs), are bearing the brunt of the factional fighting in the country since 1991.

During a visit to Mogadishu last week, John Ging, Director of Operations in the Office for the Coordination of Humanitarian Affairs (OCHA), said that despite gradual improvements in the humanitarian situation in Somalia, the needs remain immense and urged greater investment to break the cycle of crisis in the Horn of Africa nation.