Posted on: May 2nd, 2013 by AlYunaniya Staff No Comments

Amid hunger strike, UN urges US to close down Guantanamo 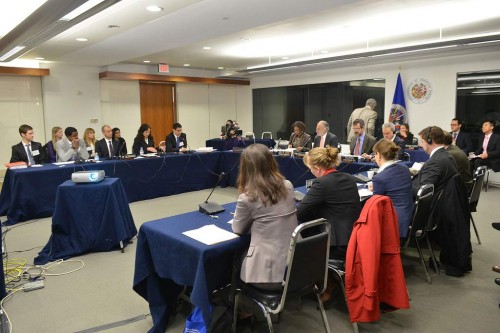 With some 100 prisoners at the Guantanamo Naval Base on a hunger strike, a group of United Nations independent human rights experts yesterday reiterated their calls on the United States to shut down the detention centre.

“The United States must respect and guarantee the life, health and personal integrity of detainees at the Guantánamo Naval Base, particularly in the context of the current hunger strike,” a group of international experts on human rights, arbitrary detention, torture, counter-terrorism and health said in a news release from the Office of the High Commissioner on Human Rights (OHCHR).

The Commission also urged the US Government to adopt concrete measures to end the indefinite detention of persons; to ensure the detainees are either released or prosecuted in accordance with due process and the principles and standards of international human rights law; and to allow for independent monitoring by international human rights bodies.

President Barack Obama said on Tuesday that he would recommit himself to closing the Cuba-based prison, a goal he has voiced at least three times in the past four years but which is hampered by Congressional opposition.

“You can’t just set up something like that and keep it in perpetuity, which is in fact what Congress has made possible by bringing in a new law in the beginning of the year called the National Defence Authorization Act which essentially provides for the indefinite military detention without charge or trial of detainees at Guantánamo Bay,” Rupert Colville, a spokesperson for the UN Human Rights Office told UN Radio.

In a statement, the Special Rapporteur on torture, Juan E. Méndez, noted that the indefinite detention of individuals, most of whom have not been charged, “goes far beyond a minimally reasonable period of time and causes a state of suffering, stress, fear and anxiety, which in itself constitutes a form of cruel, inhuman, and degrading treatment.”

Around half of the 166 detainees in the centre have been cleared for transfer to their home countries or third countries for resettlement. “All relevant security-related Government agencies or authorities have expressly certified that those detainees do not represent a threat to US security,” said the Special Rapporteur on countering terrorism, Ben Emmerson.

However, the cleared detainees continue to remain in the centre, alongside those reportedly designated for indefinite detention.

“Of those, 56 are Yemeni nationals who have been denied release based solely on their nationality and on the political situation in Yemen, which constitutes a clear violation of the principle of non-discrimination and renders their detention arbitrary and constitutes a flagrant violation of international law,” explained El Hadji Malick Sow, who currently heads the UN Working Group on Arbitrary Detention.

Last month, the High Commissioner for Human Rights, Navi Pillay, said she was “deeply disappointed” by the US inaction on closing the centre. She also noted that the continued incarceration of cleared detainees raised serious concerns under international law and severely undermined US stance as an upholder of human rights.

Speaking with UN Radio today, Mr. Colville said the ongoing hunger strike is a manifestation of the uncertainty felt by the detainees.

“One can only imagine the feelings of these people who one minute they’re told they’re cleared for transfer home and then it doesn’t happen. You’ve got now this hunger strike which is really a symptom of extreme desperation,” he said.

According to media reports, 21 of the reported 100 striking detainees are being force-fed a nutritional supplement through tubes inserted in their noses.

While the individual circumstances of those detainees are unclear, the UN Special Rapporteur on health, Anand Grover, stressed that “health care personnel may not apply undue pressure of any sort on individuals who have opted for the extreme recourse of a hunger strike.”

She added that it is also not acceptable to use threats of forced feeding or other types of physical or psychological coercion against individuals who have voluntarily decided to go on a hunger strike.

Independent experts, such as the special rapporteurs cited, are appointed by the Geneva-based UN Human Rights Council to examine and report back, in an unpaid capacity, on specific human rights themes.