Posted on: September 9th, 2013 by AlYunaniya Staff No Comments

Ashton on Syria, reflecting the agreed position of the EU 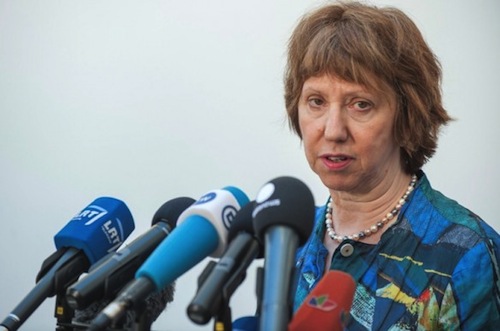 In a statement reflecting the agreed position of the EU, High Representative of the Union for Foreign Affairs & Security Policy Catherine Ashton said: “On 21 August, a large-scale chemical attack was perpetrated in the outskirts of Damascus, killing hundreds of people, including many women and children. That attack constituted a blatant violation of international law, a war crime, and a crime against humanity. We were unanimous in condemning in the strongest terms this horrific attack.

Information from a wide variety of sources confirms the existence of such an attack. It seems to indicate strong evidence that the Syrian regime is responsible for these attacks as it is the only one that possesses chemical weapons agents and means of their delivery in a sufficient quantity.

In the face of this cynical use of chemical weapons, the international community cannot remain idle. A clear and strong response is crucial to make clear that such crimes are unacceptable and that there can be no impunity. We must prevent creating a dreadful precedent for the use of chemical weapons in Syria again, or elsewhere.

The EU underscores at the same time the need to move forward with addressing the Syrian crisis through the UN process. We note the on-going UN investigation on the 21st of August attack and further investigations on other chemical weapons attacks carried out in this conflict. It hopes a preliminary report of this first investigation can be released as soon as possible and welcomes President Hollande‘s statement to wait for this report before any further action. The EU urges the UN Security Council to unite in its efforts to prevent any further chemical attack. To that effect, it encourages the UNSC to fulfil its responsibilities and take all initiatives to achieve this goal. The EU and its member states intend to play a full and active part in that context.

The EU recalls the individual responsibility of the perpetrators of attacks of this type, who must be held accountable, and the role of the ICC in investigating and judging such acts.

Only a political solution can end the terrible bloodshed, grave violations of human rights and the far-reaching destruction of Syria. An encompassing diplomatic process leading to a political solution is now more urgent than ever. The initiative for a “Geneva II” peace conference must move ahead swiftly. The EU is ready to provide all support needed to achieve a political settlement and work with partners and international actors, particularly the United Nations.

The EU will uphold its commitment, as the largest donor, to provide aid and assistance to those in need due to the Syrian conflict. It will maintain its readiness to help the recovery, rehabilitation and transition in Syria, in accordance with the needs of the Syrian people.”