Posted on: January 7th, 2013 by AlYunaniya Staff No Comments 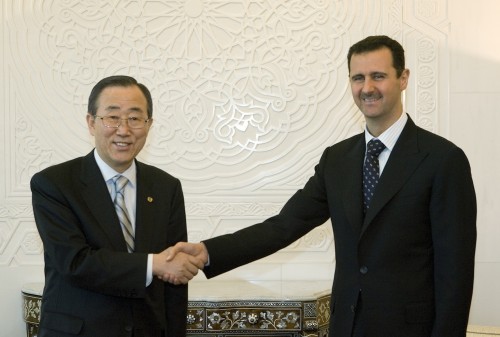 Syrian President Bashar al-Assad on Sunday in a rare speech layed out what was billed as a new peace initiative that included a national reconciliation conference and a new constitution in a bid to end the 22 month conflict in the country which has killed an estimated 60,000 people.

However, Syrian opposition groups were quick to reject the new peace initiative by President Bashar al-Assad. George Sabra, vice president of the opposition National Coalition, told Reuters the peace plan Assad put at the heart of his speech did “not even deserve to be called an initiative.”

The president’s rare address on Sunday in a hall at the opera House in central Damascus, his first since June, said the new initiative could only get under way when Western countries stop funding and arming rebels and said he is ready to hold a dialogue with those “who have not betrayed Syria”.

Assad said his nation is in a “state of war”.

“We do not reject political dialogue … but with whom should we hold a dialogue? With extremists who don’t understand any language but that of terrorism?”

“Or should we have dialogue with puppets brought to the country by the West,” he added.

“His remarks are just repetitions of what he’s said all along. They are the same promises he made to us,” Davutoglu said.

Meanwhile, EU foreign affairs chief Catherine Ashton said Brussels would “look carefully if there is anything new in the speech, but we maintain our position that Assad has to step aside and allow for a political transition” while State Department spokeswoman Victoria Nuland said his initiative is detached from reality, undermines the efforts of Joint Special Representative Lakhdar Brahimi, and would only allow the regime to further perpetuate its bloody oppression of the Syrian people.