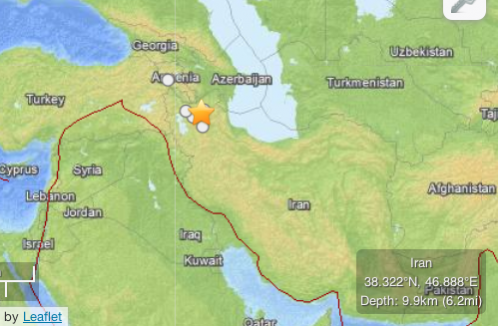 Gholamreza Masoumi, the country’s head of emergency services said that the injured were being taken to Tabriz, the biggest city in the region, and Ardebil, a neighouring province.

The quakes measured 6.2 and 6.0 on themagnitude scale, according to Tehran University’s Seismological Centre while the US Geological Survey, ranked them as stronger than that, at 6.4 and 6.3, respectively.

Tehran University’s Seismological Centre said the first earthquake hit at 4:53pm local time (12:23 GMT), with an epicentre just 60km from Tabriz, close to the town of Ahar, and a depth of 10km. The second – a big aftershock – hit 11 minutes later from nearly the same spot. A series of at least 10 smaller aftershocks rating 4.7 or below rapidly followed, according to Reuters.

Authorities feared the death toll could rise as rescuers were still trying to reach people trapped under rubble.

According to local officials, 4 villages have been destroyed completely, while 60 others have sustained damage from 50 to 80 percent only in Ahar region, Fars news agency said.

According to the report of Presidential Office website, the cabinet members in the message expressed their deep sorrow over the incident and expressed sympathy with victims’ families.

The government called on all natural disaster headquarters and responsible bodies to mobilize all their possibilities and releif equipment and provide quake-stricken areas with all kinds of necessary assistance.