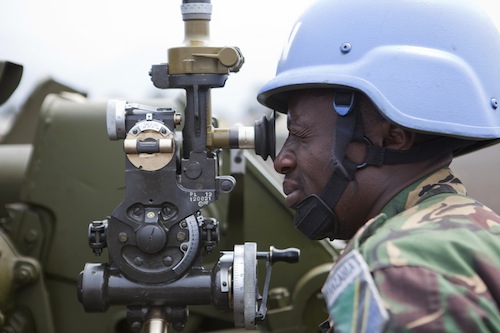 In the wake of the latest attack on United Nations peacekeepers in the Darfur region of Sudan, the Prosecutor of the International Criminal Court (ICC) reiterated that such incidents may constitute war crimes.

Prosecutor Fatou Bensouda condemned the killing on 13 July of seven peacekeepers serving with the joint UN-African Union peacekeeping mission in Darfur (UNAMID), and the wounding of 17 military and police personnel.

The ambush carried out by a large unidentified group, which drew condemnation from Secretary-General Ban Ki-moon and the Security Council, was one of the most serious attacks against the mission since its deployment in early 2008, and the third in the past few weeks. The office will not hesitate to investigate and prosecute those alleged to have committed such crimes should the national authorities fail to.

“The Prosecutor reminds all parties to the conflict that the International Criminal Court has jurisdiction in Darfur […] and that the intentional directing of attacks against peacekeepers may constitute war crimes,” said a statement issued by the Prosecutor’s office.

“The office will not hesitate to investigate and prosecute those alleged to have committed such crimes should the national authorities fail to,” it added. “The Prosecutor calls on the Government of Sudan to carry out a prompt and full investigation and to hold all those responsible to account.”

The Darfur region of Sudan is one of eight situations currently under investigation by the ICC. The others are northern Uganda, the Central African Republic (CAR), the Democratic Republic of the Congo (DRC), Kenya, Libya, Mali and Côte d’Ivoire.