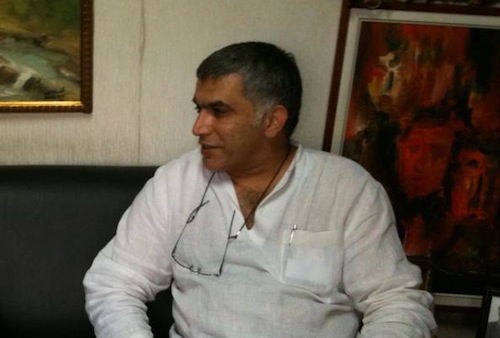 Bahrain must immediately release a prominent human rights activist and prisoner of conscience sentenced to three-month’s in prison following his conviction for libel, after the authorities took exception to a post he made on Twitter, Amnesty International said.

Nabeel Rajab, the President of the Bahrain Centre for Human Rights, was arrested on 9 July, just hours after a court in the capital Manama sentenced him for libel following a complaint made against him by the people of al-Muharraq area, north of Bahrain, for “publicly vilifying the al-Muharraq people and questioning their patriotism with disgraceful expressions posted via social networking websites”.

“Nabeel Rajab’s imprisonment is the latest example of how, despite government promises to introduce reforms following its violent crackdown on protesters in 2011, few improvements have been seen on the ground. It’s clear that repression of freedom of expression is continuing with impunity in Bahrain,” said Ann Harrison, Amnesty International’s Middle East and North Africa Deputy Programme Director.

“Like many others in Bahrain, Nabeel Rajab is a prisoner of conscience, jailed solely for peacefully exercising his right to freedom of expression. He should be released immediately and all other charges or convictions against him dropped or overturned. The authorities must also act to ensure that all human rights defenders are able to carry out their work without fear of reprisal.”

The charges against Rajab related to a 2 June tweet addressing the Prime Minister, Shaikh Khalifa Bin Salman Al Khalifa, following his visit to the area. Rajab wrote: “Khalifa: Leave the al-Muharraq alley ways, their sheikhs and their elderly, everyone knows that you have no popularity there; and if it was not for their need for money they would not have come out to welcome you – when will you bow out?”

Rajab was arrested on 6 June following complaints about the tweet from several people of al-Muharraq. He was charged with libel on 14 June and released on bail on 27 June.

Rajab is now held in al-Jaw prison, in Manama. He has already served 21 days of his three-month sentence. His lawyer has lodged an appeal which is scheduled to be heard on 18 July. Rajab still faces three further court cases.

In November 2011, a report by the Bahrain Independent Commission of Inquiry (BICI), set up by the king, Shaikh Hamad bin ‘Issa Al Khalifa, concluded that the authorities had committed gross human rights violations with impunity, including excessive use of force against protesters, widespread torture and other ill-treatment of protesters, unfair trials and unlawful killings.

The report urged the government to establish an independent body to oversee the implementation of the BICI’s recommendations; to usher in legislative reforms to ensure laws are in line with international human rights standards; to bring to account those responsible for abuses; to release all prisoners of conscience and to conduct investigations into allegations of torture.

So far the government has done very little. Reforms have been piecemeal and have failed to provide real accountability and justice for the victims.

Violations continue to be committed against those who oppose the Al Khalifa family’s rule. Several demonstrations in June were reportedly suppressed by excessive force.

On 27 June, another activist, Zainab al-Khawaja was hit on her thigh by a tear gas canister shot at very close range while she was documenting incidents during a demonstration in Buri village, south-west of Manama calling for greater respect for the right to peaceful protest. She told Amnesty International the injury left her with a fractured bone and 17 stitches.

Fellow activist Said Yousif Almuhafdah, who works for the Bahrain Centre for Human Rights and who was also present during the attack, filed a complaint in a police station and was told an investigation into the incident would be launched.

Meanwhile, the government is refusing to release scores of prisoners who are incarcerated simply because they called for meaningful political reforms, and is also failing to address the Shi’a majority’s deep sense of discrimination and political marginalization.

Last month, during an official visit to the UK, Bahrain’s Minister of Interior Lt-General Shaikh Rashid bin Abdullah Al Khalifa, insisted that there were no detainees held in Bahrain on account of their opinions but only people “who had committed acts punishable under the law”.

The Bahraini Penal Code contains vaguely worded provisions that can be used to criminalize the legitimate exercise of freedom of expression, association and assembly.

Rajab is facing trial on charges of taking part in an “illegal gathering” and “disturbing public order’ during an anti-government protest in Manama on 6 February. The next hearing for this case is scheduled for 26 September 2012.

Another ongoing trial relates to charges of “illegal gathering” brought against him on 6 June. The next session of this hearing is due to take place on 16 July.

Rajab is also appealing against his 28 June conviction of “insulting a national institution” (the Ministry of Interior) in his tweets. The appeal is due to be heard on 27 November.