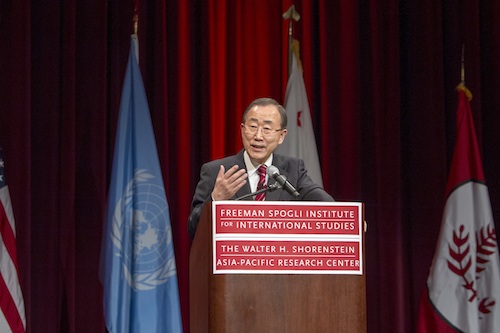 Secretary-General Ban Ki-moon urged Arab nations to deepen and broaden the reforms under way in order to improve lives, enhance opportunities and advance equality in the region.

“In the last few years, Arab citizens have raised their voices to demand political change, democracy, economic and social development and an end to corruption. Today’s gathering is an opportunity to respond to their legitimate calls for progress, freedom and dignity,” Mr. Ban told the Third Summit Meeting on Arab Economic and Social Development, held in Riyadh, Saudi Arabia.

In remarks delivered by Rima Khalaf, Executive Secretary of the United Nations Economic and Social Commission for Western Asia (ESCWA), Mr. Ban applauded many of the reforms that are occurring in the region.

He commended King Abdullah of Saudi Arabia on his recent appointment of 30 women to the Shura Council, welcomed the adoption of a new constitution in Egypt, and reaffirmed his support for the Tunisian authorities as they seek to build consensus in drafting a constitution. He also welcomed progress in Libya and Yemen, and pledged the UN’s steadfast support for Iraq.

“Across the region, the challenge now is to deepen and broaden reform efforts,” said the Secretary-General.

“In particular, a new and more hopeful era for the Arab world demands that youth and women have opportunities to realize their aspirations. When Arab women enjoy their rights and realize their full potential, they will unleash enormous progress in their communities and countries.”

Mr. Ban noted that the region faces “significant” challenges such as growing unemployment and economic marginalization that have fuelled discontent. He also cited the need for major investments to create jobs and promote innovation.

“To address these longstanding inequalities, we need mechanisms that will increase political participation and strengthen social safety nets to protect and empower the poor,” he stated.

Development in the Arab region has been held back by protracted conflict, injustice and occupation, he noted, adding that the stalemate in the Israeli-Palestinian peace process is “especially troubling.”

“We must renew our collective engagement to resume meaningful negotiations that will realize Palestinian aspirations to live in freedom and dignity in an independent State of their own, side by side with Israel in peace and security,” he stated, reaffirming that the UN is fully committed to working with all international partners and the parties themselves to achieve this goal.