Posted on: January 27th, 2013 by Arif Mansour No Comments 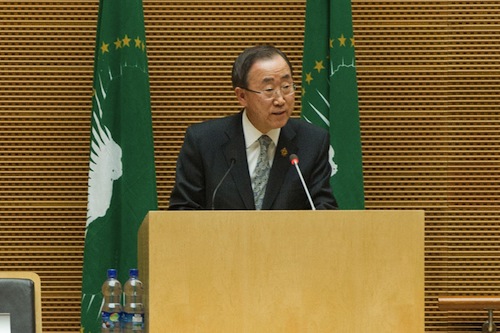 Speaking at the African Union Summit in Addis Ababa, Ethiopia, Secretary-General Ban Ki-moon today called on the continent’s leaders to boost efforts to lift millions out of poverty and end recurrent cycles of violence to accelerate development in the region.

“Africa has the experience to forge solutions to its own challenges and contribute to our global goals of inclusive growth, social justice and protecting our environment,” Mr. Ban said in his address to the Summit’s opening session.

He noted that many countries have made important gains to achieve the anti-poverty targets known as the Millennium Development Goals (MDGs). The eight MDGs set specific targets on poverty alleviation, education, gender equality, child and maternal health, environmental stability, HIV/AIDS reduction, and a ‘Global Partnership for Development.’

“More African children are in schools, especially girls. More clinics are helping more women survive childbirth. More African women sit in Government and key decision-making positions,” Mr. Ban said, adding that in spite of this progress, he is still concerned about hundreds of millions of Africans living in poverty.

Mr. Ban urged African leaders to accelerate efforts to achieve the MDGs before their 2015 deadline, and stressed that success will depend on ownership by governments and civil society.

“Our destination is clear: A future where Africa’s wealth enriches all of Africa’s people. Where misrule is only found in history books. Where Africa’s goods get a fair price on the global market. Where global partnerships mean shared prosperity.

Young people and women will be key to drive peace and development in the continent, Mr. Ban said, underlining the importance of investing in their health and education, and providing them with a secure environment.

“We especially need to speak out against rape and sexual violence in conflict. Governments must support victims and end the culture of impunity,” he said.

Mr. Ban underscored that peace is essential for development, and reaffirmed the UN’s commitment to work with countries in the region to address conflict and violence.

Regarding the crisis in Mali, Mr. Ban said the UN is determined to do all it can to help the people in the country, with humanitarian agencies currently assisting civilians in need. “The United Nations has also sent specialists on the military and political tracks. This is a moral imperative for all in the international community,” he said.

Fighting between Government forces and Tuareg rebels broke out in northern Mali last January, after which radical Islamists seized control of the area. The renewed clashes in the north, as well as the proliferation of armed groups in the region, drought and political instability in the wake of a military coup d’état in March have uprooted hundreds of thousands of civilians.

Last month, the Security Council authorized the deployment of an African-led International Support Mission in Mali, known as AFISMA, for an initial period of one year to assist the authorities in recovering rebel-held regions in the north and restoring the unity of the country.

Mr. Ban called on Malian authorities to embrace a comprehensive political process, and agree on a roadmap leading to full restoration of constitutional order. In addition, he reiterated his full commitment to ensure that the UN stands read to undertake major peacebuilding efforts as well as security sector reform, reconstruction and regional cooperation once the combat operations come to an end.

In the Democratic Republic of the Congo (DRC), Mr. Ban said the UN Stabilization Mission in the country (MONUSCO) is doing everything it can to protect civilians, and encouraged regional leaders to endorse a peace, security and cooperation framework to address the causes of violence in the country.

During the Summit, Mr. Ban also addressed a special event on the Campaign for Accelerated Reduction of Maternal Mortality in Africa (CARMMA), where he pledged the UN’s support to expand the campaign so that pregnant and nursing mothers in the continent have access to nutrition and healthcare.

The Secretary-General also met with various African leaders on the margins of the Summit, including Ethiopian Prime Minister Hailemariam Desalegn, with whom he discussed the situation in Somalia, Sudan and South Sudan, Mali and DRC. Mr. Ban also met with the President of Côte d’Ivoire, Alassane Ouattara, and commended the progress in the country, while stressing the need for reconciliation and disarmament to ensure stability.

In a meeting with Palestinian President Mahmoud Abbas, Mr. Ban reiterated his strong support for the Palestinian people and discussed the need for renewed momentum on the peace process. In addition, Mr. Ban met with the Chairperson of the AU Summit, Nkosazana Dlamini-Zuma, with whom he exchanged views on collective efforts to address the situation in the DRC and Mali