Posted on: June 16th, 2013 by AlYunaniya Staff No Comments 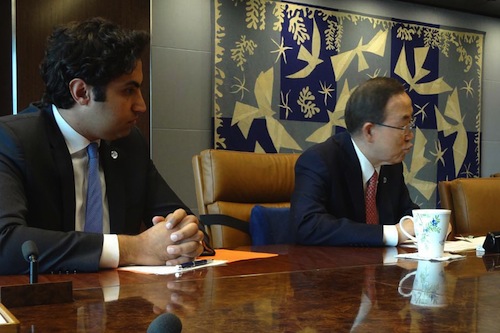 Secretary-General Ban Ki-moon issued a call to action for the world’s youth to tackle climate threats, stressing that young people are “agents of change” that bring fresh and innovative ideas to address “this most pressing issue.”

“I am glad to have this chance to talk with you, to discuss the most important and most pressing issue which will increasingly feature in your lives and coming generations,” Ban told a group of youth delegates attending UN climate change negotiations in Bonn, Germany, in a videoconference.

“Climate change is a threat to development, the stability of countries and economies, and the health of the planet. Extreme weather is costing trillions of dollars and endangering lives and livelihoods all around the world.”

Ban told the delegates that youth would play a key role in his Climate Change Leaders’ Summit in New York in September 2014, to catalyze ambitious action on the ground, to reduce emissions and to strengthen climate resilience.

“When I say “leaders”, I’m talking about Government leaders,” Ban said. “But I’m also talking about leaders from business, finance and civil society, including youth. It is imperative that the powers of all change-agents be harnessed to tackle climate change- no one group can do it alone.”

“Use your power as voters and consumers,” Ban said, encouraging youth to get involved by reminding their political leaders of their moral responsibility to them and future generations and by adopting measures that reduce greenhouse gas emissions and strengthen resilience to climate shocks.

Ban, who was joined in the discussion by his Envoy on Youth, Ahmad Alhendawi, also heard messages from young people submitted for him via the online platforms of Twitter and Facebook.

Asked where he envisioned youth playing the biggest role in building the momentum needed to tackle climate change, Ban told the youth leaders that it was up to all youth to challenge their peers, leaders, prime ministers, mayors, congress people, senators, and professors to take action.

“You are in the middle of a great transition era. To address climate change, we need fresh and innovative ideas.” Too often, he said, adults work to preserve business as usual and the status quo. “Young people approach problems with new ideas and a new perspective.”

Ban added that he would continue to press for action on climate change until the end of his term, at which point he would “pass the torch to you. That’s your job.”

“Are you ready to take up the challenge?” Ban asked the youth representatives at the end of the discussion. The delegates responded with an enthusiastic wave of hands.

The youth delegates are part of a group known as YOUNGO in the climate negotiations, or youth non-governmental organizations. Liam Upson of the United Kingdom Youth Climate Coalition moderated the discussion and said the group has been speaking for young people around the world since the round of climate talks in Copenhagen and ensures that “the voices of current and future generations are heard.”