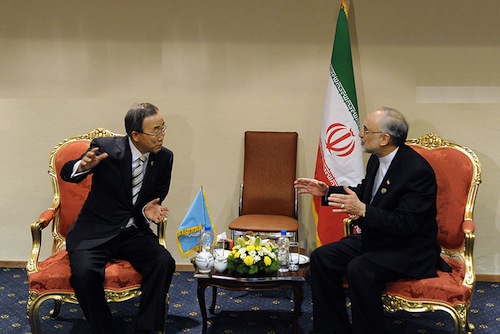 “It is regrettable that Iran has yet to reach agreement with the IAEA on a plan to resolve all outstanding issues,” the spokesperson told a news briefing at UN Headquarters in New York.

“The Secretary-General emphasizes that there can only be a diplomatic and negotiated solution to the Iranian nuclear issue which should be pursued through a reciprocal, step-by-step process,” the spokesperson added. “This must include measures by Iran aimed at building international confidence in the exclusively peaceful nature of its nuclear programme.”

According to media reports, a leaked quarterly report from the IAEA notes that Iran has doubled the number of uranium enrichment centrifuges it has in an underground bunker.

The Iranian nuclear issue was a topic of discussion in the UN chief’s various meetings in Tehran, where he attended the 16th Summit of the Non-Aligned Movement (NAM). The Summit, under the chairmanship of the Government of Iran, began in the Iranian capital on Sunday and ends on Friday, and drew representatives from its 120 members, as well as from various associated observer countries.

“The Secretary-General used the opportunity of his participation in the Summit of the Non-Aligned Movement to convey the clear concerns and expectations of the international community on this matter,” the spokesperson told the news briefing.

Iran’s nuclear activities have been of international concern since the discovery, in 2003, that Iran had concealed its nuclear activities for 18 years, in breach of its obligations under the Nuclear Non-Proliferation Treaty. Iran has repeatedly stated that its nuclear programme is for the peaceful purpose of providing energy, but many countries contend it is seeking to develop nuclear weapons.

In a meeting on Thursday, with the Iranian Foreign Minister, Aliakbar Salehi, Mr. Ban had shared his concern about Iran’s nuclear programme and underscored the importance of transparency in this matter, as well as the need for Iran to fully comply with the IAEA.

Regarding Iran’s talks with the P5+1 grouping, which is made up of the five Security Council permanent members – China, France, Russia, United Kingdom and United States – along with Germany, Mr. Ban and Mr. Salehi agreed on the need for positive momentum that would advance the talks, according to the Secretary-General’s spokesperson.

“I conclude this visit strengthened in my conviction in dialogue and diplomacy,” Ban told reporters during a press conference at Mehrabad Airport in Teheran before his departure

“Through dialogue and diplomacy, I expect Iran to contribute meaningfully to our global agenda and to regional and international peace and security.”

He added that he has condemned threats by any Member State to destroy or delegitimize another. “And I have reminded leaders here – and indeed throughout the region – to lower the volume and stop the provocation that can lead this area down a slippery slope of conflict. It is time for more reason and responsibility,” Mr. Ban said.

“I leave here mindful of the challenges, but also satisfied that we have conveyed the messages that simply must be aired at this critical time.”