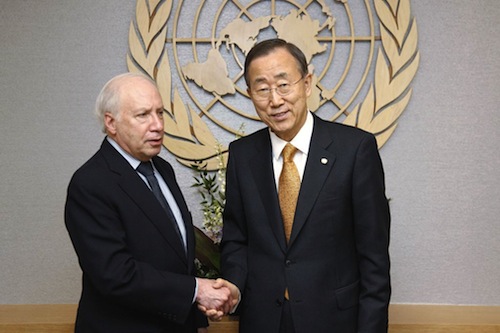 Secretary-General Ban Ki-moon today said that it is “imperative” that Greece and the Former Yugoslav Republic of Macedonia resolve the dispute over the official name of the latter country, and reiterated the determination of the United Nations to help with the process.

“Both sides need to demonstrate commitment by promoting a positive atmosphere through their actions and public statements,” Ban said in his address to the Parliament of the Former Yugoslav Republic of Macedonia in the capital, Skopje. “My Personal Envoy, Mr. Nimetz, and I are determined to facilitate a mutually agreeable solution soon.”

The envoy, Matthew Nimetz, has been heavily involved in UN efforts to reach an agreement between the two countries, in line with a UN-brokered interim accord in 1995 which details the differences between the two over the name of the former Yugoslav Republic of Macedonia, and obliges both Athens and Skopje to continue negotiations under the auspices of the Secretary-General to try to reach an agreement.

The UN chief has spent the past days in South-East Europe, promoting the partnership between the United Nations and the region, as well as discussing common challenges and future opportunities. Earlier, he visited Slovenia, Croatia, Serbia, Montenegro and Kosovo, and, after the Former Yugoslav Republic of Macedonia, he will go on to Bosnia-Herzegovina.

Addressing the media alongside the Former Yugoslav Republic of Macedonia’s President Gjorge Ivanov today, Ban said that the name issue was one of a number of issues the two men had discussed in a meeting.

“I emphasized my commitment to facilitating a prompt resolution,” he said, adding that Nimetz will brief the Greek Government about the discussions held in Skopje and will “engage more seriously and deeply to help facilitate the resolution of this issue as soon as possible.”

Nimetz would be dispatched to Athens immediately at the end of the visit to South-East Europe, the Secretary-General added, “to explain what we have discussed and I will try to engage with Prime Minister [Antonis] Samaras to help expedite this process.”

In December last year, the International Court of Justice (ICJ) ruled that Greece had breached the UN-facilitated accord with the Former Yugoslav Republic of Macedonia when it blocked its northern neighbour’s attempt to become a member of the North Atlantic Treaty Organization (NATO). In a 15-to-one decision, the ICJ ruled that Greece breached its obligations under Article 11 of the so-called Interim Accord of 13 September 1995, when it objected to the NATO candidacy of the Former Yugoslav Republic of Macedonia at a summit in Bucharest in 2008.

“I feel it regrettable that two neighbouring countries, over this name issue, have not been able to fully expand your potential for regional cooperation, reconciliation, and development and peace,” Ban told the press encounter when asked about the ICJ decision.

“I sincerely hope that the leaders will continue to engage… This has been a long-standing issue. I’m also aware of the ICJ judgment and we will all take into consideration all the issues,” he added.

The Secretary-General also said that he and President Ivanov also discussed regional issues, such as Kosovo, as well as sustainable development, former Yugoslav Republic of Macedonia participation in the Alliance of Civilizations – which seeks to promote better cross-cultural relations worldwide – and achieving the anti-poverty targets known as the Millennium Development Goals (MDGs), especially in light of the challenges of development and multi-ethnic issues in former Yugoslav Republic of Macedonia.

“The Government has made significant steps in defining national policies that recognize the country’s diversity,” Ban said. “However, we are concerned about signs of growing tensions between communities.”