Ban to attend Iran summit despite US and Israeli objections 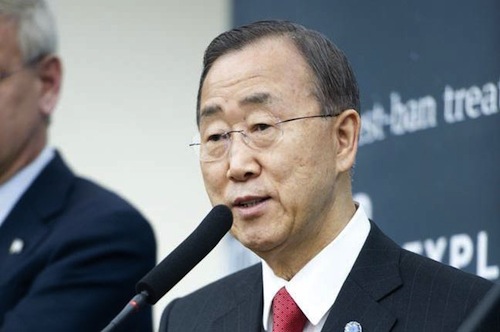 United Nations Secretary-General Ban Ki-moon will visit Iran at the end of the month to take part in the 16th Summit of the Non-Aligned Movement (NAM), according to his spokesperson.

Taking place in the capital, Tehran, and under the chairmanship of Iran, the NAM Summit will be held on 26-31 August, and is expected to draw representatives from its 120 members, as well as from various associated observer countries.

Over recent days, there have been media reports of calls, from Israel and the US, for Ban to boycott the meeting.

Earlier this month, Israeli Prime Minister Benjamin Netanyahu urged Ban to cancel his plans to take part in the Tehran summit, according to Israeli media.

Washington made clear last week that it also wants the UN chief to boycott the event, and on Wednesday the US State Department reiterated its misgivings, according to Reuters.

Mr. Ban’s spokesperson said that the UN chief takes “seriously” his responsibility and that of the United Nations to pursue diplomatic engagement with all of the world body’s Member States, in the interest of peacefully addressing vital matters of peace and security.

“With respect to the Islamic Republic of Iran, the Secretary-General will use the opportunity to convey the clear concerns and expectations of the international community on the issues for which cooperation and progress are urgent for both regional stability and the welfare of the Iranian people,” the spokesperson said.

“These include Iran’s nuclear programme, terrorism, human rights and the crisis in Syria.”

Over the past weekend, Mr. Ban’s spokesperson said the Secretary-General was “dismayed” by recent remarks threatening Israel’s existence – attributed to Iranian President Mahmoud Ahmadinejad and Supreme Leader Ayatollah Ali Khamenei – and condemned the comments, which he described as “offensive and inflammatory.”

Iran says its nuclear program is peaceful, but Western powers and their allies fear it is aimed at developing atomic weapons. Iran has been hit with four rounds of UN Security Council sanctions for refusing to halt its nuclear enrichment program.