Posted on: March 3rd, 2013 by AlYunaniya Staff No Comments 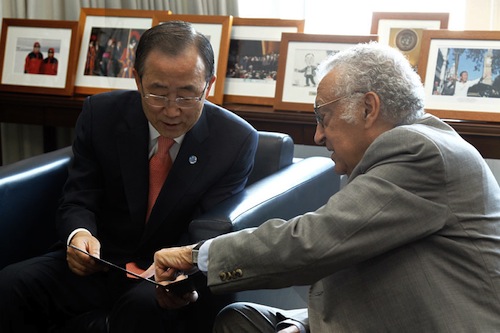 The international community must act with unity to achieve a political solution and end the suffering in Syria, Secretary-General Ban Ki-moon and the Joint Special Representative of the world organization and the League of Arab States, Lakhdar Brahimi, stressed during a meeting in Mt. Pelerin, Switzerland.

Both expressed deep frustration at the failure of the international community to act with unity to end to the conflict, and regretted that the Government and the armed opposition forces have become “increasingly reckless with human life,” according to information from Mr. Ban’s spokesperson.

They also emphasized the importance of ensuring accountability for war crimes and crimes against humanity.

During their meeting, Ban and Brahimi reaffirmed their conviction that the international community should remain focused on pursuing a political solution to arrive at a peaceful, democratic Syria that protects the right of all of its communities.