Posted on: June 6th, 2012 by AlYunaniya Staff No Comments 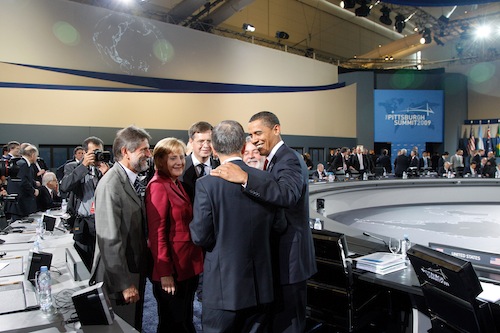 As the world’s leading economies prepare to meet later this month in Mexico, Secretary-General Ban Ki-moon stressed the need to find ways to stimulate the global economy and create jobs while ensuring inclusive green growth that drives sustainable development.

“We stand at a crossroads. Our common future is at stake,” Ban said as Member States gathered for an informal meeting in the General Assembly to express their views ahead of the summit of the Group of 20 (G20) on 18 and 19 June in Los Cabos. “We must put a face on the future we want, and we must work together – the G20 and the community of nations – to achieve it,” he added.

Ban, who will represent the views of the Assembly at the summit, said that G20 leaders will be meeting against a backdrop of anxiety. “The world economy is in a precarious situation,” he said, noting that the euro crisis may still escalate, and some developed countries are in recession, while economic growth has all but stalled in many others. “Yet, beyond the anxiety, there is opportunity,” added the Secretary-General, pointing to the UN Conference on Sustainable Development (Rio+20) that will bring the world community – including up to 130 heads of State and government – to Brazil later this month.

World leaders meeting in Rio de Janeiro are expected to define steps towards a better future for all – more equitable, more prosperous, and more respectful of the planet’s finite resources, said Ban, adding that G20 leaders will also address these issues. “In Los Cabos, I will ask leaders to once again look not just at their national concerns but at the common good, which is inextricably linked to their own interests,” he said. “We need a powerful, coordinated solution to the worldwide jobs crisis and decisive action to avoid a new global recession. We need inclusive green growth that can drive sustainable development.”

In his remarks, the UN chief highlighted six development priorities in the context of the G20 discussions: infrastructure; food and nutrition security; working on the links between infrastructure, food and nutrition security, water, oceans and energy; enhancing investments in energy efficiency and renewable energy; social protection; and supporting efforts to make financial services accessible to all. “In Los Cabos, I will stress the need to integrate and balance the three pillars of sustainable development – economic, social and environmental,” said Mr. Ban. “The G20’s work can – and must – be complementary to the goals and outcome of Rio+20.” The Secretary-General added that his expectations from Los Cabos and Rio are very similar.

“We must find ways to stimulate our economies to create decent jobs. We must provide social protection to the most poor and vulnerable,” he said. “And we must achieve all this while respecting the boundaries of our planet to make our world more prosperous, secure and sustainable for the next generations.” In his remarks to the informal meeting, General Assembly President Nassir Abdulaziz Al-Nasser said that, in the Assembly’s deliberations, it has been clear how eager Member States are to find solutions to stabilize the global markets, resume growth and job creation and begin the transition to a more sustainable model of development.

“I am glad that, through their engagement at all of the debates and meetings, Member States have demonstrated once again the central role of the United Nations, and the General Assembly in particular, in leading the process of proposing and coordinating effective economic policies,” he stated.