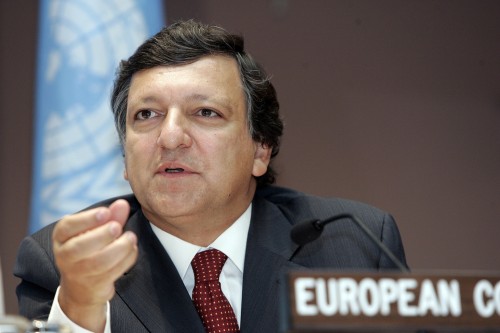 Prime Minister Antonis Samaras meets today with visiting European Commission president Jose Manuel Barroso, who, according to media reports will communicate the position to its lending partners that Greece will remain in the euro, but must quickly implement all its commitments, to prove that it is prepared to cover the lost ground and bring the programme back on track.

Earlier today, Samaras will meet with coalition partners Evangelos Venizelos (PASOK) and Fotis Kouvelis (Democratic Left) to finalise the new EUR 11.5 billion austerity package for 2013-2014, drawn up by Finance Minister Yannis Stournaras, in view of the Premier’s scheduled meeting with the troika tomorrow. Stournaras is due to meet the heads of the EC, ECB and IMF team in Greece this afternoon.

According to Kathimerini, it is expected that apart from cuts in spending in various government departments, the measures will also include considerable reductions to state pensions (saving around EUR 5 billion), which will be one of the most politically sensitive issues for the coalition to handle, given that the three parties had committed in their election campaigns to avoiding “horizontal” cuts. Sources said that an extra EUR 300 million would be cut from the healthcare budget.

“We have to ensure that the troika delivers a favorable review,” one of Samaras’s aides told Kathimerini. “There is no room for games.”

Meanwhile, according to an announcement by the ministry of Administrative Reform, 21 organizations are being merged under a pilot scheme as part of cuts in public spending. These institutions were financed with almost EUR 40 million per year, protothema.gr reported.

Initially the merged organizations will be those “that provide similar services” and it is estimated that “the merger will be able to provide the same services to citizens at lower cost for the state budget and greater efficiency, because the new organizations will be able to better exploit the available resources, streamline the use of real estate, limit boards and management positions etc.”

According to Reforms minister Antonis Manitakis, the staff of these organizations, totaling 5,256 employees, will not be laid off but will be transferred to other departments of the public sector based on staff evaluation. In all cases these services will continue to be provided either by the new organizations that will emerge, or by the supervising ministries.

According to official figures, Greece’s privatisation programme aims to raise EUR 19 billion by the end of 2015. It has so far collected just EUR 1.56 billion in cash since the first bailout agreement in 2010. More than 90% of the privatisation programme will come from the lease and concessions of state land and infrastructure.