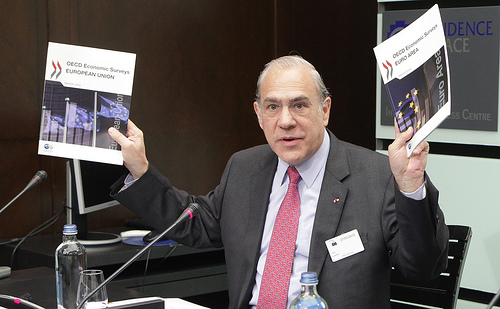 The current level of commitment to the rescue funds is not enough to restore market confidence, he said. A credible financial firewall will provide governments with the breathing space they need to focus crucially on revitalising Europe’s economic growth and competitiveness.

“Weak financial conditions, fiscal consolidation and economic adjustment are restricting demand in the short-term before the long-term benefits on stability and growth are felt,” Gurría said. “Decisive action to restore confidence and support demand is needed now.”

Presenting the OECD’s Economic Surveys of the Euro Area and the European Union in Brussels, Mr. Gurría said: “The recent measures already taken to strengthen fiscal discipline, provide liquidity and implement growth-enhancing reforms – particularly in Greece, Italy, Portugal  and Spain -  are  important advances towards a brighter economic outlook, but the challenges remain daunting.”

The economic, fiscal and financial imbalances of the area have led to weak bank balance sheets, high unemployment and low growth.

The survey calls for an ambitious programme of reforms in product and labour markets, tax systems and education to rebalance the economies, restore competitiveness, boost growth and bring down stubbornly high levels of unemployment – particularly among the young. It argues many reforms would stimulate growth even in the short-term.

“Europe is stalling. It needs to get out of first gear and make growth the number one priority,” said Mr. Gurría.

To boost economic activity at the EU level, a step change in the political commitment to the Single Market is needed. The OECD says national regulations, rigidities and poor implementation of existing EU rules are frequently holding back cross-border economic activity, growth and job creation, and are undermining the EU economy’s efficiency and competitiveness. Greater progress is needed in opening services markets.  The report calls for an annual review for each country of the obstacles to benefitting fully from a market of 500 million consumers.

Despite some 24 million unemployed people across Europe, most EU countries expect growing skill shortages in certain sectors. Labour mobility within Europe is low. The EU should encourage migration in order to help workers and firms to achieve the most productive job matches.

The two surveys highlight the need for Europe to make fundamental changes to financial supervision and regulation.  Europe needs an effective system of crisis resolution and excessively close ties between domestic banks and governments need to be undone.