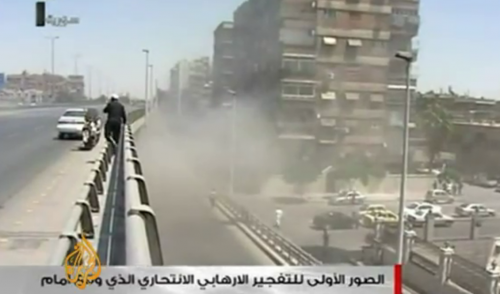 Nine people is the initial death toll of a suicide bombing on Friday which rocked the Syrian capital, according to State TV, stirring uncertainty about hopes for the success of a U.N.-backed peace plan.

Opposition activists said the bomb struck worshipers at the Zain al-Abideen mosque, which was under heavy security for Friday prayers, where regular protests against President Bashar al-Assad have been held in the last year, Alarabiya reported.

The Secretary-General said he remained “deeply troubled” by the continued presence of heavy weapons, military equipment and army personnel in population centres, as reported by UN military observers, which is in “contravention” of the Syrian Government’s commitments to withdraw its troops and heavy weapons from areas.

Another blast hit an industrial zone of Damascus today, but there were no reports of casualties while three security agents were wounded in a blast in the coastal city of Banias, the Syrian Observatory for Human Rights said.

Central Damascus has so far been spared much of the violence since the uprising began in March last year. But on Wednesday, bombing in Marjeh neighbourhood took place.