Posted on: November 7th, 2012 by AlYunaniya Staff No Comments 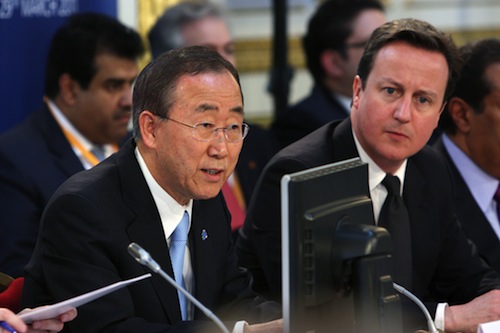 The British Prime Minister, David Cameron, has said he will support granting President Bashar al-Assad a safe passage out of Syria to help end the 20-month conflict adding that he would agree to “anything” to see Assad removed from power.

Cameron made the comments on Tuesday in a television interview on Al Arabiya while visiting the United Arab Emirates before flying to Saudi Arabia.

“I am certainly not offering him an exit plan to Britain, but if he wants to leave, he could leave, that could be arranged,” Cameron told Al Arabiya television.

The British Foreign Office later clarified that London was not making Assad an offer. “We have been clear that Assad should face justice and that it is for the Syrian people, including the opposition, to decide the details of a transition including the options for Assad. The longer the killing goes on, the fewer options Assad will have,” according to a statement by the Foreign office.

Amnesty International UK Syria campaign manager Kristyan Benedict said: “Instead of talking about immunity deals for President Assad, David Cameron should be supporting efforts to ensure that he faces justice, ideally at the International Criminal Court at The Hague.

“After Syrian government forces have indulged in a massive campaign of indiscriminate bombings, mass round-ups and torture, there should be no question of Bashar al-Assad escaping justice with a cosy deal of this kind,” she added.

A failed ceasefire bid, new reports of atrocities, an increase in the number of car bombings and a still-dire humanitarian situation mark some of the highlights since Mr. Brahimi’s briefing of the Council two weeks ago, the political affairs chief noted in his comments.

Meanwhile, battles between government forces and rebels continued on the ground, with the Syrian Observatory for Human Rgihts reporting more than 1200 deaths on Tuesday.

Bombs exploded in several districts of the capital, Damascus, and the state news agency said gunmen killed the brother of the parliament speaker while he drove to work in the city.

The attack was the latest in a wave of assassinations targeting Syrian officials, army officers and other prominent supporters of Assad’s regime.