Posted on: September 8th, 2012 by Julie Jalloul No Comments 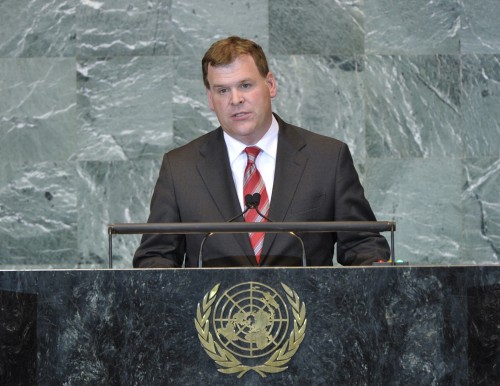 Canada has closed its embassy in Iran and will expel all remaining Iranian diplomats in Canada within five days as it formally declared Iran a state sponsor of terrorism.

“Canada views the Government of Iran as the most significant threat to global peace and security in the world today,” he said.

“The Iranian regime is providing increasing military assistance to the Assad regime; it refuses to comply with UN resolutions pertaining to its nuclear program; it routinely threatens the existence of Israel and engages in racist anti-Semitic rhetoric and incitement to genocide, he added.

In response to Baird’s remarks, Foreign Ministry spokesman, Ramin Mehmanparast, said in a statement that the closure of the Canadian Embassy in Tehran by Canada’s government is the continuation of Canada’s Prime Minister’s anti-Iran policies and an obvious breach of international law.

He referred to numerous and hostile measures by the Canadian government against the Iranian society of Canada as closing down the visa section of the Canadian Embassy in Tehran and freezing the accounts of Iranians, as well as blocking cash transfer for Iranian university students of Canada.

“Hostile attitude of the Canadian racist government is indeed pursuing the policies as dictated by the Zionist regime and the UK,” Mehmanparast added.

The spokesman noted that the government of Canada tried hard to prevent Iran from holding the Non-Aligned Movement (NAM) Summit which failed due to negligence of participating countries and international personalities.

The United States also does not have a functioning embassy in Tehran since 1980, when 52 Americans were held hostages for 444 days. Britain’s embassy in Tehran has been closed since it was stormed by protesters last November.