Canada pledges $13 million in aid to Syrian refugees in Jordan 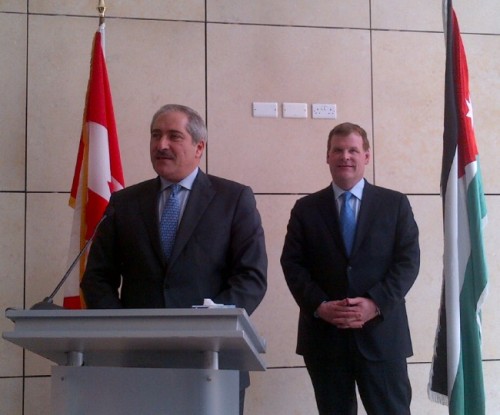 On Sunday, the Canadian government pledged $13-million in humanitarian aid to help Jordan cope with the influx of Syrian refugees.

“Canada is pleased to assist Jordan in meeting this challenge. Today, I am pleased to announce we are making available more than $13 million in bilateral aid to help Jordan deal with the immediate and pressing humanitarian and security needs brought on by the Syria crisis,” Foreign Affairs minister said in a statement.

“Jordan has consistently demonstrated a leadership role in the pursuit of a just and lasting peace in the Middle East, and it continues to lead in the face of the ongoing crisis in Syria. Jordan’s generosity in hosting an influx of Syrian refugees is a model for all. Some 2,000 desperate Syrians arrive in Jordan daily. Accepting them is not without sacrifice or risk domestically. It is done in the finest tradition of promoting human dignity,” he added.

Canada had previously already given Jordan $11.5 million to help with the influx.

Thousands of refugees have poured into Jordan during the past two years, exerting further pressure on Jordan’s already weak economy.

Canadian Foreign Affairs Minister John Baird made the announcement from Amman, where he met with Jordanian officials to discuss the two countries’ strong bilateral relationship, and ways to strengthen it further.  They also discussed the crisis raging in neighbouring Syria, and Jordan’s important contribution to the humanitarian response.

“Canada’s close and important relationship with Jordan is further enhanced by today’s inauguration of Canada’s new embassy building here in Amman. It was an honour to be able to do this alongside my Jordanian counterpart, Nasser Judeh. He is a dear friend and a true partner in this region.

Baird is on a 12-day tour of the Middle East, which will also include stops in Qatar, Bahrain and Israel.