Posted on: October 25th, 2013 by Tina Michalitsis No Comments 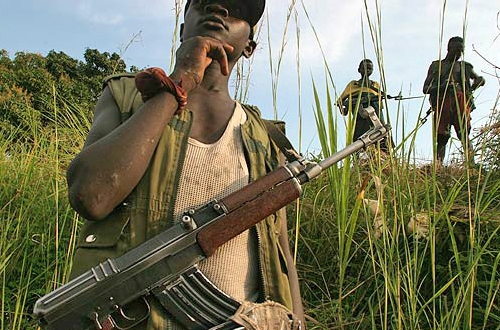 The United Nations peacekeeping mission in the Democratic Republic of the Congo (DRC) said today it is extremely concerned about persistent reports of child recruitment by armed groups in the country, and called on all actors to help stop this grave violation against children.

According to a report published yesterday, almost 1,000 cases of child recruitment by armed groups were verified by the mission – known by its French acronym MONUSCO – between 1 January 2012 and 31 August 2013, predominantly in the eastern province of North Kivu.

“Despite awareness raising campaigns and attempts to pacify armed groups, recruitment of children remains endemic in the country, with high numbers of children recruited in the past two years as a result of renewed hostilities in the east of the country,” states the report, the first of its kind by the UN mission.

The armed groups Nyatura, Forces démocratiques de libération du Rwanda (FDLR) and the 23 March Movement (M23) were identified as having recruited 190, 137 and 124 children, respectively, into their groups during the reporting period.

Children who were victim of recruitment within the ranks of these armed groups were also victims and witnesses of other grave child rights violations, such as rape, abduction, killing and maiming.

“This situation is unacceptable and has been going on for much too long with impunity. Recruiting children into armed groups is a crime, and destroys the lives of the victims who are forced to do things that no child should be involved in,” said Martin Kobler, the Secretary-General’s Special Representative for DRC and head of MONUSCO. “We need to stop this now. One case of child recruitment is one case to many,” he added.

In the majority of cases, children were abducted and forced to join the groups. Others joined voluntarily after having been promised money, education, jobs and other benefits by recruiters. Children were used as porters, cooks, spies, sex slaves, guards and combatants.

Minors formerly associated with the M23 described how they were tasked with burying bodies of adults and children who lost their lives during clashes with the DRC national army (FARDC) and other armed groups.

MONUSCO called on the commanders of all armed groups to immediately stop grave violations perpetrated against children and to unconditionally release all children still held within their ranks.

National authorities are encouraged to ensure full and effective implementation of the Action Plan signed between the Government and the UN to end and prevent child recruitment; hold perpetrators of grave child rights violations accountable; support MONUSCO in gaining access to negotiate for the release of children from armed groups; and ensure that armed groups who wish to integrate into the FARDC are screened for the presence of minors who must be handed-over to MONUSCO or child protection partners.

The mission also recommended that the Government, the international community, donors and all child protection actors ensure all efforts are made to prevent child recruitment and to ensure long-term, sustainable reintegration programmes for the victims.