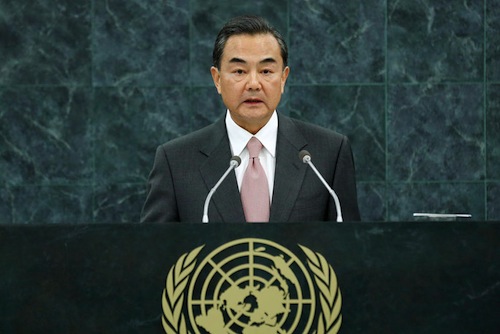 China will firmly promote global governance reform with the United Nations at its core, the country’s Foreign Minister told the General Assembly, while also stressing Beijing’s commitment to play an active role in international diplomacy and be a voice on behalf of developing countries.

“It is our consistent position that the purposes and principles of the Charter of the United Nations form the cornerstone of current international relations and provide safeguards for world peace and stability,” Chinese Foreign Minister Wang Yi told the 68th General Assembly high-level debate.

Respecting national sovereignty and opposing interference in internal affairs, safeguarding peace and opposing aggression, and promoting equality and opposing power politics must be observed, he added.

Underscoring the country’s stance as the second biggest economy and a permanent, veto-carrying member of the Security Council, Mr. Wang stressed that China “will firmly fulfil its due international responsibilities and obligations.”

He also called for greater representation and voice of developing countries in the global governance system to make the international order “fairer and more equitable.”

Turning to the wider global scene, the Foreign Minister said that China plans to play a “more proactive and constructive role” in addressing international and regional hotspots.

In reference to the situation in Syria, Mr. Wang called for an immediate end to hostilities and violence to create necessary conditions for the verification and destruction of chemical weapons.

“China seeks no self gains in Syria and does not take side on the Syrian issue,” he stated, but said the Government is following with “great concern” the humanitarian situation in the country and its impact on the neighbouring States.

China has supported efforts of the UN World Food Programme (WFP) and the UN World Health Organization (WHO) in Syria, as well as Jordan and Lebanon.

Wang is among the leaders speaking at the annual General Assembly session at which heads of State and Government and other high-level officials present issues of individual national and international relevance. The General Debate continues through 1 October.