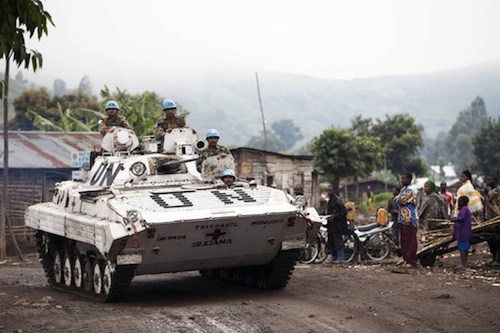 The United Nations peacekeeping mission in the Democratic Republic of the Congo (DRC) transferred hundreds of Mayi-Mayi combatants to Kinshasa after the rebels turned over their weapons to the peacekeepers this weekend and took part in UN-led mediation.

According to information from the UN mission, known by its French acronym MONUSCO, 245 Mayi-Mayi Kata Katanga combatants entered the UN compound on 23 March where they sought refuge following an earlier attack.

“The Mayi-Mayi elements arrived at the MONUSCO compound at around 13:30 local time, on Saturday, after being repelled by Government troops, following a surprise attack against Government institutions in Lubumbashi,” said the Department of Peacekeeping Operations (DPKO) in New York.

Following negotiations mediated by MONUSCO between the provincial authorities and the Mayi-Mayi, the Combatants were transported by the Congolese authorities to Kinshasa on two flights, the UN said.

In a news release, MONUSCO welcomed the “peaceful surrender” of the combatants.

Among them, the UN Children’s Fund (UNICEF) had identified and separated 40 children to be demobilized and sent back to their families.

Local non-governmental organizations estimated that at least 35 people, including civilians, were killed in the fighting in the city. An additional 16 combatants were injured and transferred to local hospitals for attention.

The UN Security Council tasked MONUSCO with supporting the Congolese authorities in their stabilization and peace consolidation efforts, including assisting with the holding of elections, the monitoring of human rights violations and support for Government action against armed groups operating in the east of the country. A possible revision of the mandate is currently under review.