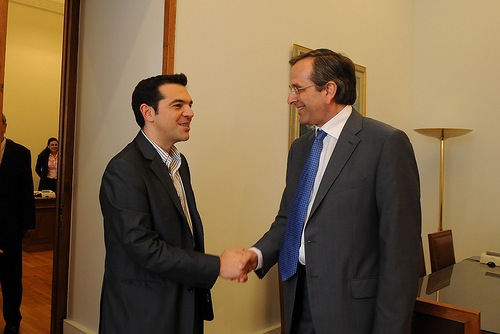 A harsh battle to the end and unprecedented polarization is expected on the election field in the next couple of weeks. According to tovima.gr, with New Democracy maintaining a slight advantage in recent polls and SYRIZA being superior amongst younger voters and Attica area, pre-election antagonism remains inconclusive and will be judged in the details. New Democracy hopes to voters who remain undecided even now. “Since they have not joined SYRIZA so far, chances are that most of them will come to us” ND executives say. SYRIZA cadres argue that the findings of opinion polls indicate that the party could reach higher levels than most expect. “In a few weeks we went from 4% to 16.78% and now over 20%; no one knows where the rise will stop”, they say.

According to opinion polls published until midnight Friday, when the ban of publication began, ND was leading with more than 25%, followed closely by SYRIZA, which has a strong crowd in Attica area (according to the latest poll by Kapa Research, SYRIZA leads in Attica with 26% vs. ND’s 22.9%) and in young voters (30.1% vs. 17.9%).

PASOK appears ‘blocked’ at the level achieved in previous elections (13.18%), since it seems unable to approach dissatisfied voters. A significant reduction of electoral strength is observed in the cases of Independent Greeks, KKE and Golden Dawn, whereas Democratic Left seems to record a small decline, or increase, depending on the poll. From the parties that on May 6 failed to reach the Parliament threshold, Re-Create Greece/Drasi seems the only party that could manage to enter the House.

Meanwhile, the debate between Antonis Samaras and Alexis Tsipras -which could play a key role in shaping the election outcome- has been canceled, allegedly due to a disagreement as regards the participating journalists.

SYRIZA said Alexis Tsipras wants a free televised debate that would cover all subjects, protothema.gr reports. They say that Antonis Samaras’ associates are seeking to lead the processes to a dead end in order to cancel the debate. In addition, they explain that their wish is for the debate to escape the narrow limits to which it were held in previous years and have a dialogue in which every political leader will be able to reply directly to his interlocutor or even interrupt him.

According to Kathimerini, ND claimed it had agreed with SYRIZA almost all the details for a Samaras vs Tsipras debate but that the leftists scuppered the deal by issuing two statements outlining their positions on the discussions. SYRIZA said it wanted two debates: one between Samaras and Tsipras based on the format of the French presidential debate and another between the leaders of all the parties, apart from Chrysi Avgi (Golden Dawn).

ND states that although the name of journalist Nikos Hatzinikolaou had been agreed on for carrying out the debate, suddenly SYRIZA tabled another journalist as well (Elli Stai). Earlier, SYRIZA had proposed conducting two debates, one between Samaras and Tsipras and another with the participation of all leaders except Golden Dawn’s N. Michaloliakos.

SYRIZA said: “after days of silence, ND finally decided to announce its pre-assumed decision not to conduct debates, fearing the visibility and contrast of its positions before the Greek people. This is a cowardly political stance…” There had been no agreement between the two parties since ND repeatedly looked for excuses and hid by postponing contacts between representatives of the parties, while it falsely leaked that an agreement had been decided upon.